National Railway Historical Society Announces the Return of RailCamp in 2014 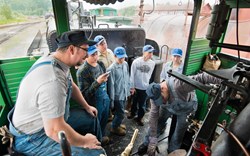 RailCampers learn how to operate a steam locomotive at the Mount Rainier Scenic Railroad in Mineral, WA, under the guidance of Stathi Pappas, chief mechanical officer. (photo by Bob Harbison)

In past years, students have learned about preservation techniques, railroad history, and career opportunities in today’s rail industry.

RailCamp East will be held July 6-11, 2014, and be based in Newark, Delaware, with some activities in Strasburg, Pennsylvania. The RailCamp Northwest program will take place on July 27-August 2, 2014, and once again be held in Tacoma, Washington.

In RailCamp East, longtime partner Amtrak will host campers at its National Operations Center and High-Speed Rail Training Facility in Wilmington, DE, where they will be immersed in the daily operation of the nation’s passenger railroad. Students will also spend two days at the Strasburg Rail Road and the Railroad Museum of Pennsylvania in Strasburg, PA, where they will learn about restoring steam locomotives and vintage passenger equipment. The railroad museum will also teach campers about the unique history and culture of Pennsylvania railroads. Lodging and meals will be provided at the University of Delaware in Newark, DE.

RailCamp Northwest will include a day with Amtrak at the newly renovated King Street Station in Seattle and its adjacent maintenance facility. Students will also visit the operations center of Tacoma Municipal Belt Line (Tacoma Rail) and participate in a working railroad environment. Other locations include the Northwest Railway Museum at Snoqualmie WA, and the Mount Rainier Scenic Railroad at Mineral, WA, where campers will help with preservation activities, physical plant maintenance and train operations. New to the program is a day at Seattle’s Sound Transit facility to explore the operations of commuter train and municipal light rail transit. Students will be housed at the University of Puget Sound in Tacoma.

Registration forms and news updates can be found at http://www.nrhs.com/program/railcamp and the society’s Facebook page at https://www.facebook.com/RailPreservation. Those with questions are invited to e-mail the society at info(at)nrhs(dot)com.

New additions to the program staff are Camp Managers Mike Muldowney and Janice Bauer, former RailCampers, who will oversee day-to-day operations and ensure a safe and fun learning environment for students.

“We’re indebted to the support of our industry partners, as well as the generosity of our members who support RailCamp scholarships,” said Gregory Molloy, president of NRHS. “All scholarship funds that were earmarked for the 2013 season will be used in 2014. RailCamp has successfully served over 480 youth campers in its 15-year history and we are thrilled that it will return.”

RailCampers learn how to operate a steam locomotive at the Mount Rainier Scenic Railroad in Mineral, WA, under the guidance of Stathi Pappas, MRSR's chief mechanical officer. (photo by Bob Harbison)