For The Love Of A Good Fight – Queendom.com's Study Reveals That Arguing In Relationships Isn’t Necessarily A Bad Thing

Queendom.com and PsychTests.com’s latest study on the role of conflict in couples indicates that arguing itself is not a problem – it’s HOW the couple fights that matters. 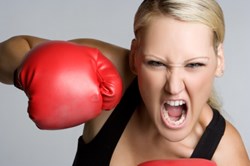 Fighting with a partner is one thing...fighting dirty is another.

The belief that happy couples do not or should not fight is false, if not unhealthy.

Fighting with a partner is one thing...fighting dirty is another. Queendom.com’s study of 27,643 people who took their Arguing Style Test reveals that couples who take a negative approach to fighting, both in terms of attitude and technique, are more likely to experience a break-up as a result.

Conflict, arguing, fighting. They are words so intertwined with negativity that they can’t be weaved apart. See a couple fighting in public and people will stare. Hear neighbors arguing through an open window and the surrounding houses suddenly get suspiciously quiet as they listen in. But everyone does it – so why is it a problem?

Researchers at Queendom.com as well as 65% of people they studied agree that arguing can be healthy in a relationship (at least to some degree), but there is one caveat: How a couple fights – each individual’s “arguing style,” that is – can mean the difference between healthy conflict resolution and an all-out, spiteful war of words.

Analyzing data from more than 27,000 people who took their Arguing Style Test, Queendom’s statistics indicate that people who have had a fight that directly led to the demise of a romantic relationship were more likely to use negative fighting tactics or to fight “dirty” (score of 59 vs. 49 for those who have not had a relationship-ending conflict - on a scale from 0 to 100). They also had a more negative attitude toward conflict itself, indicating that they are more likely to believe that nothing can be gained or learned from fighting with their partner.

Queendom’s study also revealed that of those who have had arguments that lead to break-ups:

“Arguing can be a way for a couple to grow and better understand one another – and despite what some couples might think, there are ways to fight constructively,” explains Dr. Ilona Jerabek, president of the company. “It’s not a matter of determining who is right and who is wrong, but rather, clarifying why the issue you are fighting over is important, and how you both stand to benefit by resolving it. The belief that happy couples do not or should not fight is false, if not unhealthy. People who are satisfied with their relationship still have their disagreements, but they talk things out, listen to each other’s side of the story, find common ground, focus on finding a mutually-beneficial solution, and speak with tact. And if things get too heated, they take a break, and wait until they’ve calmed down before taking up the discussion again.”

So what are the ground rules for constructive fighting? Here are some tips from Queendom.com:


“Any long-term relationship will involve conflict, no matter how much the partners love each other,” concludes Dr. Jerabek. “Contrary to the myth of conflict-free marriages, constructive arguments are healthy, as they clear up the air, resolve the inevitable disagreements, and as a bonus, often times help to reignite the passion in a stale relationship. The trick is to learn how to argue effectively and to fight fair.”

The Arguing Style Test can be taken by anybody interested at: http://www.queendom.com/tests/take_test.php?idRegTest=673

Destructive fighting techniques have a negative impact on relationships ... and can even be fatal.Infographic about good and bad arguing techniques