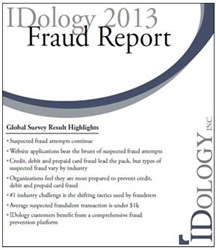 'We are very excited to have officially launched our first annual Global Fraud Report,' said John Dancu, CEO of IDology.

IDology, a leading provider of on-demand technology solutions that verify an individual’s identity and age for anyone conducting business in a customer-not-present environment, today announced the launch of their 2013 Fraud Report which polled senior executives from IDology’s comprehensive customer base in order to collect and analyze their expertise when it comes to suspected fraud throughout their industry.

“We are very excited to have officially launched our first annual Global Fraud Report,” said John Dancu, CEO of IDology. “The fraud landscape is constantly evolving as fraudsters become more and more knowledgeable of prevention practices. This is a problem as it impacts costs and revenue throughout an organization’s entire process. This Fraud Report presents the collective input of some of the world’s most talented and diligent anti-fraud practitioners and provides useful insights to assist other organizations in their fraud prevention practices.”

A few highlights from the report:

“It becomes clear throughout this study that suspected fraud attempts remain a concern and that organizations can benefit from implementing comprehensive fraud prevention programs and platforms throughout their enterprise,” said Dancu. “At IDology, we maintain a solution-driven approach to identity and age verification that can quickly adapt as fraud tactics change. Our goal is to help companies acquire more customers in a frictionless way while simultaneously providing tools to reduce fraud.”