President McRobbie will visit groundbreaking IU-Moi University AMPATH partnership in Kenya, one of the largest, most comprehensive public health efforts in sub-Saharan Africa. 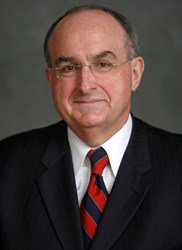 This trip to Africa is of great importance to Indiana University, as we continue to help prepare this and future generations of students.

Indiana University President Michael McRobbie will leave Saturday for a two-week trip to Ghana, Kenya and South Africa, the first trip to Africa by a sitting IU president in more than two decades.

The trip will further IU's educational reach internationally; increase academic and research opportunities for the university's students and faculty; and strengthen one of its most effective global partnerships.

McRobbie will lead an IU delegation to three of South Africa's largest cities -- Cape Town, Johannesburg and Pretoria -- as well as to Eldoret and Nairobi, Kenya, and to Ghana's capital city, Accra. On those stops, members of the delegation will meet with officials at several of Africa's premier universities, academic, business and political leaders, and prominent IU alumni.

"This trip to Africa is of great importance to Indiana University, as we continue to help prepare this and future generations of students to collaborate across cultures and nations and create solutions to the world's most pressing challenges," said McRobbie, who will be joined on the trip by IU Vice President for International Affairs David Zaret and IU first lady Laurie Burns McRobbie.

"South Africa, Kenya and Ghana are democracies that represent three of Africa's most dynamic, fastest-growing economies, and they offer fertile ground for IU as we look to grow study-abroad opportunities for our students, generate faculty research collaborations across our respective continents and recruit top students from sub-Saharan Africa to pursue an education at IU and bring with them a unique cultural perspective."

IU has more than 170 international students from sub-Saharan Africa, which is also an increasingly popular destination for IU students who elect to study abroad. More than 100 IU students study in Africa each year.

The Institute of International Education ranks IU seventh among more than 1,200 U.S. universities in overall number of students studying abroad and 11th in the number of international students enrolled.

Central to the trip will be a series of meetings at the Academic Model Providing Access to Healthcare program in Eldoret, Kenya. AMPATH is a historic academic medical partnership between a consortium of North American academic health centers, led by the IU School of Medicine and Moi Teaching and Referral Hospital. McRobbie will be the first IU president to tour the groundbreaking program, one of the world's largest and most comprehensive programs to combat HIV/AIDS.

Formed in 1989 and nominated multiple times for a Nobel Peace Prize, AMPATH serves a population of 3.5 million people in over 500 urban and rural clinical sites throughout western Kenya and has enrolled more than 160,000 HIV-positive people. In recent years, AMPATH has broadened its mission to include helping to feed 31,000 HIV-affected people daily; providing school fees, nutrition and other assistance for over 20,000 children left orphaned or vulnerable because of HIV/AIDS; and enrolling 10,000-plus patients in income security programs, including agricultural extension services, micro-finance and small business initiatives.

"I am delighted that we will have the opportunity to visit the world-renowned AMPATH program and meet with the leadership of this extraordinary partnership between the IU School of Medicine and Moi University in Kenya," McRobbie said.

"In its response to the HIV/AIDS pandemic and other major health issues in sub-Saharan Africa, AMPATH continues to demonstrate the power of an academic medical partnership and how universities can employ their teaching, research and other intellectual resources to bring about major global change at the same time as they prepare students for success in a 21st-century global environment."

"One can read statistics about how the program serves and benefits 3.5 million people in western Kenya; but, it's another thing to see it with one's own eyes," Einterz said. "Every year, IU students and faculty returning from Kenya describe their work there as one of the most transformative experiences of their careers. We are thrilled that President McRobbie will witness firsthand the marvelous impact Indiana University is making through this global partnership."

Highlights of the trip will include:

An expected agreement signing between IU's Kelley School of Business and the University of Pretoria's Gordon Institute of Business Science in Johannesburg, one of South Africa's leading business schools.

A tour of Christel House in Cape Town, South Africa, a K-12 school established in 2002 that currently enrolls 773 students. The school is part of Christel House International, founded by Indianapolis businesswoman and philanthropist Christel DeHaan, which seeks to help children and families around the world escape poverty.

Meetings with the leadership of AMPATH, including Einterz and program co-founder Joe Mamlin.
A tour of Moi Teaching and Referral Hospital and the AMPATH center in Eldoret, Kenya.
A new partnership between IU and Moi University and a sub-agreement between Moi University and the IU School of Journalism.

Meetings with senior officials at the University of Ghana and faculty at the university who have benefited from IU scholarships.

Joining the IU delegation in Kenya will be Nasser Paydar, executive vice chancellor and chief academic officer at Indiana University-Purdue University Indianapolis. Idalene "Idie" Kesner, dean of the IU Kelley School of Business, will be with the delegation in South Africa.

IU has numerous connections in Africa, dating back several decades and stemming from a variety of fields including applied health science, medicine, business, fine arts, geological sciences, journalism, languages, law and politics. Many of those connections constitute the academic foundation of the university's African Studies Program, housed in the newly established School of Global and International Studies in the College of Arts and Sciences. The program, which celebrated its 50th year in 2011, has long been recognized as one of the leading centers for the interdisciplinary study of Africa, and it has been a U.S. Department of Education National Resource Center every year since 1965.

"Our ties in Africa go back many decades and always have been cordial and productive," Zaret said. "IU has many alumni in Africa; some have risen to prominent positions in higher education, government and industry. We hope to assure our partner institutions of our continuing commitment to joint efforts and to expanding those efforts. We will also reconnect with alumni whose loyalty and commitment to IU seem to grow ever stronger."

Reports as the trip progresses, including blog posts and photos, will be available at a new website, global.iu.edu/blog/africa.

About Indiana University
INDIANA UNIVERSITY is a major multi-campus public research institution, grounded in the liberal arts and sciences, and a world leader in professional, medical, and technological education. Indiana University’s mission is to provide broad access to undergraduate, graduate, and continuing education for students throughout Indiana, the United States, and the world, as well as outstanding academic and cultural programs and student services. Indiana University seeks to create dynamic partnerships with the state and local communities in economic, social, and cultural development and to offer leadership in creative solutions for 21st century problems. Indiana University strives to achieve full diversity, and to maintain friendly, collegial, and humane environments, with a strong commitment to academic freedom.