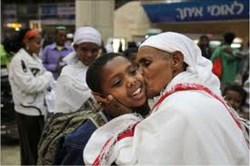 Such greetings are the hallmark of an Ethiopian immigrant's arrival in Israel.

The last chartered flight of Operation Dove’s Wings will land in Israel next Wednesday, August 28, in accordance with the Government of Israel’s decision to complete this historic journey of organized Aliyah from Ethiopia. A farewell ceremony will take place that same morning at the Israeli Embassy in Addis Ababa. Jewish Agency Chairman, Natan Sharansky, Israel's Ambassador to Ethiopia, Belaynesh Zevadia, and Israel’s Minister of Immigrant Absorption, Sofa Landver, will be in attendance. Shortly thereafter, approximately 450 new immigrants from Ethiopia will board two chartered flights organized by The Jewish Agency.

Upon their arrival in Israel, there will be a welcome ceremony for the new olim (immigrants) at Ben-Gurion's Airport Terminal 1. The new immigrants’ relatives will be there to greet them as will The Jewish Agency partners in Completing the Journey of Operation Dove's Wings, Israel’s Ministry of Immigrant Absorption, The Jewish Federations of North America (JFNA), the International Fellowship of Christians and Jews (IFCJ), and Keren Hayesod – United Israel Appeal (KH-UIA), among others.

Operation Dove's Wings began three years ago in November 2010 with the Government of Israel (GOI)’s decision to bring 8,000 Falash Mura in Gondar to Israel. The GOI tapped The Jewish Agency to prepare those eligible for entry to Israel and to facilitate their Aliyah in concert with immigration eligibility standards regulated by Israel’s Ministry of the Interior and in preparation for their resettlement in Israel by the Ministry of Absorption.

Since Dove’s Wings’ inception, The Jewish Agency brought 7,000 Ethiopian Jews to Israel, the majority of whom are members of the Falash Mura community, and several hundred of whom were eligible for Aliyah through Israel’s Law of Return.

To prepare these olim (immigrants) for a successful life in Israel, The Jewish Agency for Israel has run a community center in Gondar, Ethiopia for the past three years and with the support of IFCJ and JFNA. This center has provided a wide range of educational and social services. Upon their repatriation in Israel, The Jewish Agency housed these new immigrants in 17 absorption centers throughout the country that are run by The Agency and Israel’s Absorption Ministry.

Mr. Sharansky shared that “Completing the Journey of Operation Dove's Wings brings to a close a historic journey that began three thousand years ago.” Since 1948 with the founding of Israel, 90 thousand Ethiopian Jews have immigrated to Israel. Chairman Sharansky thanked The Agency's global and Israeli partners for their sustained support to bring these olim to Israel and to facilitate their absorption there. Sharansky added that “The Jewish Agency will continue to assist any Ethiopians deemed eligible for Aliyah by Israel’s Interior Ministry, as we do for Jews worldwide.”

Minister of Absorption Sofa Landver said, "Three years after I advised the Prime Minister of Israel to bring Operation Dove’s Wings to an end, to close the compound in Gondar and to complete the journey of organized Aliyah from Ethiopia, I am proud to take part in this historic event. I wish to thank all our partners and promise that the Government of Israel will do everything in its power to resettle these new immigrants in the best way possible.”