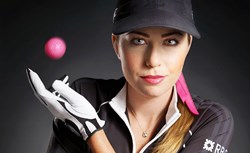 Paula Creamer didn’t walk away with any titles from last week’s 2013 Solheim Cup, but this week she was crowned sexiest golfer of the LPGA by more than 2600+ single golfers, it was announced today. In a poll conducted by Golfmates.com, the largest online dating website for single golfers, Creamer beat the competition by a wide margin, which included Spanish stunner Beatriz Recari, a victor on the Solheim Cup European team.

“How you look on the green is as important to golfers as how they perform, so it’s no surprise that more than 2600 Golfmates singles were so enthusiastic about giving their opinion on who are the sexiest golfers of the LPGA, PGA, and the Champions Tour,” said Meir Strahlberg, CEO of Avalanche, LLC. “These poll results prove that, regardless of age, professional golfers can be very sexy.”

The month long poll was conducted from July 15 – August 15, 2013 and surveyed single golf enthusiasts ranging in ages from 18-55+. Follows are the complete poll results:

Question: Who do you think is the sexiest golfer of the LPGA?

Question: Who do you think is the sexiest golfer of the PGA?

Question: Who do you think is the sexiest golfer of the Champions Tour?

About Avalanche, LLC.
A pioneer of online dating, Avalanche operates a network of 18+ general and niche dating websites. Date.com, its flagship brand, was launched on Valentine’s Day 1997, and is one of the world’s most popular dating sites. Matchmaker.com, started as a BBS in 1986, is the longest running dating site on the Internet. It was acquired by Avalanche in 2006 and targets singles looking for love, marriage, and serious relationships. Amor.com, launched in 2007, is the leader in Latin dating. It is enjoyed by US Hispanics and Latin singles throughout South and Central America. Jewcier.com, launched in 2011, is a newcomer in the Jewish online dating space, but is already the second largest Jewish dating site. In 2012, the company acquired Militarysingles.com, the largest online dating community for military singles. Recently, the company entered the sports niche online dating space with the acquisition of Golfmates.com a leading dating website for single golf enthusiasts. In 2013, Avalanche launched OnlineDatingCash.com, an affiliate portal for all its websites. A privately owned company, Avalanche, LLC. is headquartered in Miami Beach, Florida. Additional information is available at http://www.avalanchellc.com/.