The new collection of expert-designed phrases and pictures will help students with speech disabilities achieve their full potential in college, university, and vocational training programs. 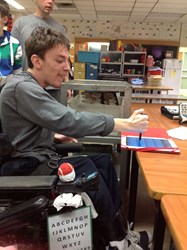 “With the College Life Pack for TalkRocket Go, we hope to empower students with communication difficulties, inside and outside of the classroom” said Tina Doyle, Director of AccessAbility Services at University of Toronto Scarborough.

The College Life Pack includes hundreds of phrases and pictures that make it easier to ask questions in a lecture, independently access campus facilities, and participate in social experiences. It also offers comprehensive vocabulary related to services on campus such as the registrar's office, disability services, and academic departments, making the learning environment easier to navigate.

“Technology is ‘the great equalizer’ for students with disabilities,” said Tina Doyle, Director of AccessAbility Services at University of Toronto Scarborough. “With the College Life Pack for TalkRocket Go, we hope to empower students with communication difficulties, inside and outside of the classroom.”

“We all know how intimidating that first day of class can be,” says Alexander Levy, CEO of MyVoice. “The new College Life Pack for TalkRocket Go will help make higher education more accessible, interactive, and fun for students with speech challenges.”

Often intended exclusively for younger users, many communication aids are not equipped with phrases and pictures adapted to adult settings. In contrast, TalkRocket Go for iPad, iPhone, and iPod Touch is easily customized to any age group, and is now used by thousands of people, both young and old. With the introduction of the College Life Pack, TalkRocket Go is becoming an even better option for young adults with challenges such as Autism, Cerebral Palsy, and Traumatic Brain Injury.

To download the new vocabulary pack, users of TalkRocket Go can simply tap “Add Vocab Pack” within the app, and select “College Life” from the available options.

About TalkRocket Go
TalkRocket Go is an app for iPad, iPod Touch, and iPhone that helps users communicate verbally. The app has helped thousands of people worldwide with diverse disabilities including Autism, Cerebral Palsy, Traumatic Brain Injury, Stroke, and Parkinson's disease. It has been used by children as young as 16 months, and adults as old as 97 years. TalkRocket Go is priced at $99.99 in the iTunes Store, and equivalent prices worldwide.

About AccessAbility Services, University of Toronto Scarborough
The mission of AccessAbility Services is to ensure that all students with disabilities can freely and actively participate in all facets of University life; to provide and coordinate services and programs that enable students with disabilities to maximize their educational potential and to increase awareness of inclusive values among all members of the University community.

About Tina Doyle
Tina Doyle is the Director of AccessAbility Services at the University of Toronto Scarborough. Prior to working at the University, Tina worked with adults with a variety of disabilities including those who used communication aids, such as picture boards and sign language. Tina has over 25 years of experience collaborating with persons with disabilities on access and inclusive practices in Canada.

About MyVoice
MyVoice Inc. is a Toronto-based company that makes innovative technologies for people with speech disabilities. MyVoice is a leader in the ongoing movement to use new devices like the iPad to empower people with disabilities. Before MyVoice and its peers, communication aids were more complex to operate, and would cost up to $20,000, putting them out of reach for most people in need. MyVoice’s communication aid apps - TalkRocket Go and the newly launched RocketKeys - are pioneering amazing new features, while also being among the most affordable products of their kind.

MyVoice’s apps have won the Autism App of Distinction award, were featured by Apple as a recommended Special Education app, and have been named the #1 Medical App in the United States, and Canada. MyVoice’s creators were named the University of Toronto’s Inventors of the Year and PROFIT Magazine’s Entrepreneur of the Year.

A TalkRocket Go "College Life Pack" image on an iPad.