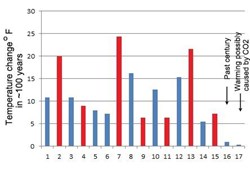 the IPCC and its scientific conclusions were set on a track to become a self fulfilling prophecy.

Mother Jones magazine and the New York Times are citing frightening global warming scenarios from the leaked upcoming report by the International Panel on Climate Change (IPCC). The New York Times August 23, 2013 editorial claimed extreme storms like Sandy are a “harbinger of the calamities that await in an era of climate change.”

Friends of Science dispute these reports saying the evidence does not support these calamitous predictions. Judith Curry, chair of the School of Earth and Atmospheric Sciences at the Georgia Institute of Technology and noted climatologist published a statement on motivated reasoning in science: "Once the UNFCCC treaty was a done deal, the IPCC and its scientific conclusions were set on a track to become a self fulfilling prophecy."

The tornado count in the US year-to-date in 2013 is only 58% of normal (2005 to 2012 average). The global hurricane energy and frequency have declined significantly since 1998. In fact, only 3 hurricanes have made landfall in the USA during president Obama's 5-years presidency, the fewest of any president. In contrast, 26 hurricanes made landfall during the presidency of Grover Cleveland when CO2 level were low.

Friends of Science advocate a rational review of new evidence that shows that IPCC climate models fail to make accurate predictions; scary leaked predictions should not be trusted.

A team of German scientists from the Institute for Coastal Research and the Max-Planck-Institute for Meteorology compared global warming trends to predicted warming trends computed by 23 climate models. The paper here says there has been no surface warming from 1998 to 2012 based on several global datasets.

“The fact that climate models are so inconsistent with the evidence means there is 98% likelihood that the warming effects of carbon dioxide (CO2) emissions is overestimated,” says Ken Gregory, director of Friends of Science.

Friends of Science hold the position that natural climate factors, like the influence of the sun, are underestimated in models and not properly attributed from the outset.

Climate models utilized by the IPCC assume that most of the warming of the last half of the 20th century was caused by human-caused greenhouse gas emissions, primarily CO2. The IPCC assume natural causes of climate change are insignificant, even though accurate ice core data shows that temperatures in the past have changed up to 24 times faster than the 20th century warming.

“The modeled warming trend since 1979 in the tropical mid-troposphere is four times greater than measurements,” says Gregory. “These are very significant margins of error. The huge discrepancy is due to a decline in water vapor.”

Friends of Science warn that the recent low solar activity may foreshadow significant cooling during the next few decades.

“Governments have wasted over $1.6 trillion dollars of taxpayers’ money worldwide in a futile attempt to reduce carbon dioxide and ‘stop global warming’ thanks to these faulty predictions,’” says Gregory. “Global warming stopped all by itself, but now there is a multi-trillion dollar ‘low-carbon’ global industry on life-support http://judithcurry.com/2013/08/20/scientists-and-motivated-reasoning/ and needs to literally ‘scare up’ some money.”

Charts of Tornado Count, Hurricane Energy and Frequency CountThe tornado count in the US year-to-date in 2013 is only 58% of normal (2005 to 2012 average). The global hurricane energy and frequency have declined significantly since 1998.