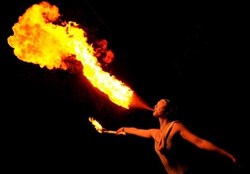 Fire Troupe will perform in "Cirque Devou Deux" this weekend

"An evening at both the circus and the symphony - it doesn't get more family-friendly than this." James Cassidy, KSO Music Director

Join the Kentucky Symphony Orchestra (KSO) and Circus Mojo for Cirque Devou Deux, an evening of musical delights, hilarity, and amazing feats with performers from around the world at 7:30 p.m. Saturday August 31, 2013 in Covington's Devou Park.

Circus Mojo founder Paul Miller, a former Ringling Bros. clown, convinced his professional circus colleagues from around the world to converge on Covington’s Devou Park for a one-night only extravaganza, accompanied live by members of the Kentucky Symphony Orchestra. There won’t be three rings or elephants, but high flying, spinning, fire-breathing, juggling acrobats and clowns will offer fun, thrills and nostalgia for the entire family.

Thousands of Tri-state residents attended Cirque Devou in 2010 when the KSO and Circus Mojo first collaborated at the park. However, this is an entirely new show. Director Aaron Easterbrooks leads an international contingent of circus performers from Ethiopia, Argentina, Hungary, Bulgaria, Tanzania, Mexico, together with local Circus Mojo performers. International circus performer Christian Stoinev and his chihauau Scooby will perform their award winning act, while Mexico native and aerial acrobat, Omar Fuentes goes both vertical and horizontal atop the Chinese poles. 2012 U.S. National Wheel Gymnastics Champion Luisina Rosas and Sam Sake will perform a touching duo German wheel act to Adele’s “Someone Like You.”

Musically, the KSO explores the atmospheric musical sounds à la Cirque du Soleil and the klezmer-esque fun of Cirkestra, together with nostalgic traditional big-top tunes and a sprinkling of pop, jazz and movie favorites. Since 1995, over 300,000 area residents have gathered to make multi-generational memories at KSO's Devou Park Concerts. The KSO differentiates itself from other more traditional orchestras with unusual and one-of-a-kind programs that are unique to the region and often the nation. For example, April’s debut of the musician/comedy team Igudesman and Joo and this November’s 2Cellos premiere, both are first appearances in the U.S. with orchestra.

Attendees should bring blankets and lawn chairs to enjoy Devou Park's idyllic outdoor venue. Parking is free throughout the park, but limited as it is a natural setting. The Transit Authority of Northern Kentucky  will operate shuttles from Covington Catholic High School on Dixie Highway to the band shell from 6:00 -7:30 p.m. for $1 each way. Plenty of popcorn, snow cones and cotton candy, will be available for purchase. Area food trucks will begin service at 6 pm.

Admission to Saturday's concert is free though donations are encouraged. Through September 1, 2013 contributions made by individuals will be doubled, up to $5,000, thanks to a special challenge grant.

About the KSO:
The Kentucky Symphony Orchestra takes the “phony” out of symphony through its live thematic concerts that culturally enrich, educate and entertain the residents of Northern Kentucky and Greater Cincinnati. The KSO performs throughout Northern Kentucky performing three series of concerts each year. For more information visit http://www.kyso.org