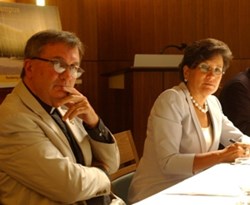 Leaders representing international trade, energy, movies and film production, information technology, health care, financial and civic interests shared with Pritzker some of the concerns their businesses are facing in today’s economy. Issues discussed included work force initiatives, liquefied natural gas permitting, health care issues related to the implementation of the Patient Protection and Affordable Care Act, and trade issues including dredging of the Mississippi River and the impact it has on ports in South Louisiana.

Pritzker was sworn in as the 38th Secretary of Commerce June 26 of this year. She is a civic and business leader with more than 25 years of experience in the real estate, hospitality, senior living and financial services industries. Pritzker served as CEO of PSP Capital Partners, and previously developed such diverse companies as Vi (formerly Classic Residence by Hyatt), a leader in luxury living for older adults; The Parking Spot, a large U.S. network of off-site airport parking facilities; and Pritzker Realty Group.

President Barack Obama appointed Pritzker to the President's Council on Jobs and Competitiveness, which advised the administration on economic growth and job creation. Pritzker previously served on the President's Economic Recovery Advisory Board.

Much of Pritzker's civic work focuses on public education. She served as advisory board chairman of The Aspen Institute’s Skills for America's Future, a national initiative that brings together businesses, community colleges and others to prepare workers for 21st century jobs. In 2012, she helped launch Skills for Chicagoland's Future, the first city model of the initiative. Pritzker is past chair of the Chicago Public Education Fund, the first venture philanthropy to raise private equity to invest in public schools, and a former member of the Chicago Board of Education.

Pritzker earned her bachelor's degree in economics from Harvard University and J.D. and M.B.A. degrees from Stanford University.