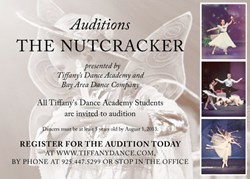 The Nutcracker is a timeless, dance classic. Each year, I look forward to not only the performance, but the auditions and rehearsals as well.

This year’s performance of the Nutcracker will be held on Saturday, December 13th. Tiffany Henderson, Co-Founder of Tiffany’s Dance Academy said, “The Nutcracker is a timeless, dance classic. Each year, I look forward to not only the performance, but the auditions and rehearsals as well. I always enjoy seeing some of our best dancers return to the stage for this Christmas favorite, and I absolutely love welcoming our newer dancers into the fold as well.”

The Nutcracker is a two-act ballet with a score by the infamous composer, Pyotr Ilyich Tchaikovsky. Originally performed in 1892, the Nutcracker has become an instantly recognizable Christmas classic, performed yearly by dance troupes and ballet companies worldwide, particularly in the United States.

Each year, Tiffany’s Dance Academy stages its own production of The Nutcracker with performances by dancers from all seven Bay Area TDA locations. This year’s December 13th performance will mark the renowned dance studio’s 12th annual staging of the Christmas favorite and will feature more than 500 dancers in three separate performances.

Tiffany Henderson founded Tiffany’s Dance Academy in 2001 and has since expanded to eight locations. Her academies have been featured in Dance Informa, Dance Studio Life Magazine, Dance Teacher Magazine, The Contra Costra Times, The San Francisco Chronicle and have participated in the 2006 Disney’s ABC TV Christmas Special with Ryan Seacrest. They have also been awarded the Bay Area Parent Magazine “Family Favorite” award for the last four consecutive years.

To learn more about Tiffany Dance Academy of Livermore and Tiffany’s Dance Academy, visit their website at http://www.tiffanydance.com. Please contact info(at)TiffanyDance(dot)com for more information regarding class schedule and pricing.