PrintableBrackets.net gets fans ready for 2013 NFL season with complimentary sheets and games. 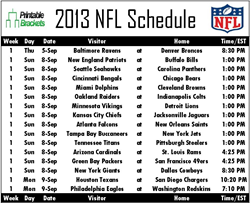 The final preseason game is mostly about staying healthy and making final evaluations.

The NFL silly season is just about over and the regular season is almost upon us. The NFL preseason wraps up with all 32 teams in action Thursday night. The regular season opens a week from Thursday with Peyton Manning and the Denver Broncos hosting Joe Flacco and the defending Super Bowl champion Baltimore Ravens.

With the season just a week away, PrintableBrackets.net is offering fans a full line of NFL games and sheets, including the complimentary football draft sheet.

“Kick-off of the 2013 NFL season is almost here,” said Printable Brackets spokesperson Zaniel Worth. “We’ve got everything a fan needs to be ready for the start of the year.”

Starters generally play little, if any, in the final game of the preseason. Notable games on the preseason schedule include the New York Giants hitting the road to face the New England Patriots, the Dallas Cowboys hosting the Houston Texans, and the Denver Broncos welcoming the Arizona Cardinals to the “Mile High” city.

“The final preseason game is about staying healthy and making final evaluations,” said Worth. “Most head coaches have a pretty good idea what their final roster will be. The last preseason game serves as the final chance for players on the bubble to make an impact.”

PrintableBrackets.net is an online leader in sports brackets, games and sheets. As part of this year’s NFL collection, the site is offering NFL pick em sheets, NFL survivor sheets, and schedules for the full season and for all 32 NFL teams. All of the items on the site are available at no charge.