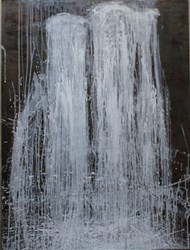 Elisa Contemporary Art presents Monochromatic Vision. Nature inspired artwork in singular palettes. The exhibit opens September 6, 2013. It will run through October 20, 2013. The exhibit delves into nature-inspired images captured and created by six American artists. It travels from the frigid Icebergs in the Antarctic to the lush Palisades along the Hudson River in New York and rushing waterfalls in Kaua'i. The exhibited artists capture visions of flowers and fowl in a new light and using a range of diverse techniques and materials.

Join Elisa Contemporary Art as the gallery celebrates it's 5th Anniversary in Riverdale with Receptions on:

Atticus works spontaneously, feeling his way toward the objects that take shape in mind as he shapes them almost entirely by hand. To some pieces he adds color and texture by applying paint or broken auto glass.

“Metal mesh is a beautiful, flexible material that allows you to explore shadow and transparency in endless ways,” he says. “The material lends itself to these biomorphic shapes, which aren’t necessarily intentional . . . The sculptures seem fragile but are actually quite resilient—like nature itself.”

Atticus grew up in West Virginia, steeped in traditional folk art. Several members of his family were self-taught artists, deeply involved in such crafts as wood carving and quilting.”

His formal art training includes stints at Yale, Rhode Island School of Design, and Harvard’s School of Architecture. He has been exhibiting his work throughout the US since 2004

Carol Bennett
Carol Bennett has lived and painted on the island of Kauai for the last 20 years. After graduating from the University of California Santa Barbara (College of Creative Studies) and the Art Center College of Design (Los Angeles), Carol became a scenic artist, painting stage sets for theater, film and TV. It was this experience that has driven Carol’s continuous exploration into texture, layering and the use of new and innovative materials. According to Carol, “I have a free-wheeling approach to technique and materials: hypothesis, experiment and conclusion…I am intrigued by the innate nature of different types of material… the nature of things”

Carol's work has been featured in many solo and group exhibits. Carol has created several public art projects including “Water as a Point of Departure” for the Nawiiwili Harbor in Oahu and a 48' x 8' photovoltaic glass canopy for the Hawai'i State Art Museum Sculpture Garden. Her work is in numerous public and private collections including The Contemporary Museum of Art (Hawaii) and The Persis Collection of Contemporary Art.

John Conn
John Conn got his start as a Marine Combat photographer, and later earned his BFA at the School of Visual Arts in New York.

In 2010, he spent 45 days in the Antarctic and Patagona traveling often on small zodiac boats to photograph Icebergs and the arctic landscapes.

As a freelance photographer, he has captured a range of subjects photojournalism, landscapes, architecture, underwater images and he has been published in The New York Times, American Photographer, Nikon World (just to name a few). His iconic New York City Subway series photography is part of the permanent collection of the Museum of the City of New York.

Elaine Galen
Internationally-recognized as a painter, sculptor, and educator, Elaine Galen has created an intimate dialogue with nature, using the painting process to explore its mystical, surreal and the spiritual aspects. Though her early work began in the style of Abstract Expressionism, she quickly developed her own distinctive style and evocative visual language.

Jesse Kalisher
Jesse's first camera arrived on his sixth birthday as a present from his father, celebrated photographer Simpson Kalisher. A darkroom soon followed. Yet despite his enthusiasm for the medium, when it came time to go to college and consider a career, Jesse took his father’s advice and focused on anything but photography.

It was not until early 1996, Jesse boarded a plane for Hanoi and two months of untold adventures. He carried with him a simple point and shoot camera. It was during his first few days in Vietnam that he looked through the small viewfinder and had an epiphany. He had seen a few kids playing badminton on an otherwise deserted early morning street, lifted that camera to his eye and expected to see a snapshot. He saw instead a tableau filled with meaning. And in that very instant he re-discovered his love affair with photography.

Jesse’s work has been featured in The New York Times, Art Business News, Black and White Magazine, Art & Living Magazine and Interior Design Magazine. His photography is in private collections throughout the world as well as many museums including The Louvre, The Smithsonian, The George Eastman House, The de Young Fine Arts Museum of San Francisco, The Museum of Fine Arts Houston and many more. The first photographs of Barack Obama acquired by the Smithsonian National Museum of American History were those taken by Jesse.

Wayne Zebzda
Hawaii based artist, Wayne Zebzda was born in Connecticut and started his journey out west attending the San Francisco Art Institute on a full scholarship as a painting major. With day jobs in construction, he integrated the tools of this trade into his art -- creating sculptural and installation works, as well as his carbon smoke drawings made with a blow torch.

According to Wayne, the process for his Carbon Smoke drawings is:
"I have to move continuously while the smoke pours out of the torch. If you have ever seen the film footage of Jackson Pollack painting it is a similar continuous movement, his with drips, mine with smoke and the added possibility of catching the drawing on fire. I enjoy the immediacy and physicality of drawing. The welding torch has the pressure turned down low which makes it sooty/smoky. Working back into the drawings with erasures and brushes reveals what's underneath and a clear fixative sets the soot in place (hopefully) and yes, I have burned the paper and will again."

Wayne is committed to making art accessible to a wide audience, and has been involved in numerous Art in Public Places projects and commissions for the Hawaii State Foundation on Culture in the Arts. His work has been exhibited and collected throughout the US.

Founded in 2007 by Lisa Cooper, Elisa Contemporary Art is dedicated to promoting the appreciation and collection of art as a way to enrich and heal our lives, our communities, and the world. The gallery opened in September 2008. Elisa Contemporary Art has participated in international art fairs in New York, Miami and the Hamptons, and curated over 12 public art exhibits in the Tri-State area. A portion of every gallery sale is donated to charities helping underserved children heal through art. We currently support Free Arts NYC and Arts to Grow. Owner Lisa Cooper also provides art consulting services.

Elisa Contemporary Art has been featured in a number of publications including Ocean Home Magazine, Hamptons Cottages & Gardens, New York Spaces and The New York Times.