Announcing Talk to Me: Suicide Prevention Campaign for September

The Trevor Project and 20 national partner organizations across health, mental health, suicide prevention, education, youth and LGBT communities join “Talk to Me” to raise awareness for suicide prevention in September. 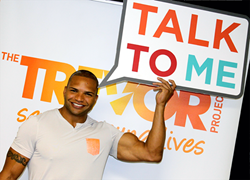 Brendan Ayanbedejo spreads the message of Talk to Me. Credit: The Trevor Project

With three simple words we can all help save a life.

Throughout September, The Trevor Project and 20 national partners will be raising awareness to prevent suicide among youth, especially those who are lesbian, gay, bisexual, transgender and questioning (LGBTQ), through “Talk to Me.” This campaign for conversation is rooted in research* that indicates improving both help-seeking behaviors and access to care can have a dramatic effect on suicide prevention. At its heart, Talk to Me is about making it okay to offer help and being willing to connect a person with life-saving resources.

“Talk to Me enters its third year of raising awareness about how, with three simple words we can all help save a life,” said Abbe Land, Executive Director & CEO of The Trevor Project. “This year, 20 national organizational partners representing leaders in mental health, education, suicide prevention, youth, and LGBT communities are sharing the messages of Talk to Me. The Trevor Project looks forward to communities across the country gaining access to life-saving, life-affirming tools and resources to help prevent suicide among LGBTQ youth.”

Raising awareness about suicide prevention in September highlights the urgency of addressing the preventable, second leading cause of death among youth as young as age 10 through age 24.** The Trevor Project and our partners will recognize World Suicide Prevention Day (Sept. 10) with a live Google+ Hangout on Air at 3pm ET, followed by a Twitter chat to continue the conversation at 4pm ET. Additional panels and social media activities occur throughout the month. Talk to Me, found at TrevorTalkToMe.org, engages youth and adults in a multi-faceted public awareness campaign to prevent suicide. Elements of the campaign include:

To learn more about Talk to Me and to get involved, visit TrevorTalkToMe.org.