In another of its popular line of online YouTube guitar lessons, GuitarControl.com’s jazz guy Jon MacLennan takes a break from his jazz riffs to teach an easy fingerpicking exercise. The approach uses both pick and fingers, called hybrid picking, and is a modified Travis picking style. 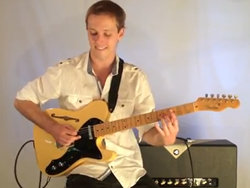 In this tutorial, titled “Rhythm Guitar Lesson – Right Hand Development – Fingerpicking Exercises,” Jon demonstrates using a C major chord and a G7 chord in first position. Instead of strumming, the player picks individual notes using the pick for the lower notes and second and third fingers for the higher notes. It takes a little getting used to, but gives the player a new style of rhythm guitar to add to the repertoire.

Players new to fingerpicking should start slowly, using a metronome or click track to stay in time and gradually build up speed. Enjoy and learn more from Jon MacLennan and all the teachers at Guitarcontrol.com in dozens of jazz guitar lessons at http://www.youtube.com/guitarcontrol.

GuitarControl.com, a leader in online music education, is the brainchild of ace Philadelphia guitarist Claude Johnson. Since its launch in 2004, the site has offered lessons taught by virtuosos in styles ranging from rock, metal and blues to jazz, bluegrass and country to classical, flamenco and fingerstyle acoustic. Its many DVD courses include Supercharged Soloing Made Simple, Larry Coryell Jazz, Fast Track Guitar System, Wicked Chicken Pickin’ Chops, How to Play Smokin’ Blues Guitar, Killer Lead Guitar Made Simple and Gospel Guitar, as well as courses for singers, drums, bass and keyboard, and music software, song collections and jam tracks.