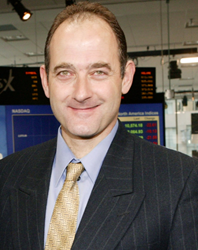 VGH reported earlier this year that it produced a 39% reduction in its surgical site infections by incorporating the use of MRSAid Photodisinfection on its patients about to undertake major surgeries.

Ondine Biomedical Inc. is pleased to announce that Dr. Nicolas Loebel, its President and Chief Technology Officer, is presenting at the 15th Congress of the European Society for Photobiology. The 2013 Congress is being held in Liège (Belgium) from September 2- 6, 2013.

Dr. Loebel will be introducing to the European photobiology community Ondine’s 14 year pre-clinical and clinical results across several applications in a presentation entitled, “Clinical application of antimicrobial photodynamic therapy to chronic disease states.”

Photodisinfection is a non-antibiotic, antimicrobial technology for the treatment of topical infections resulting from a broad spectrum of pathogens including all virus, fungus and bacteria and their virulence factors. Photodisinfection is a safe and highly effective anti-biofilm therapy that inactivates the host inflammatory response resulting in much improved patient outcomes. Unlike antibiotics, Photodisinfection does not generate resistance, even at sub-dosage, and is therefore ideal for multiple repeat usage. Photodisinfection was invented by Professor Michael Wilson of the Eastman Dental Institute, University College London in the mid 1980’s.

Since 1998, Ondine has developed a number of Photodisinfection-based products for the dental, sinusitis, wounds and hospital acquired infection (HAI) markets. Products that are currently being developed for the 3 most common HAIs include therapies for the prevention of ventilator associated pneumonia (VAP), urinary tract infections (UTI) and surgical site infections (MRSAid). MRSAid™ was recently featured in the 2013 ICPIC (International Consortium for Prevention & Infection Control) Innovation Award received by the Vancouver General Hospital infection control team lead by Dr. Elizabeth Bryce. The VGH team was the winner of this prestigious global recognition for pioneering a novel universal decolonization protocol involving Ondine’s Photodisinfection technology, MRSAid. The VGH reported earlier this year that it produced a 39% reduction in its surgical site infections by incorporating the use of MRSAid Photodisinfection on its patients about to undertake major surgeries. Vancouver General Hospital has now adopted Photodisinfection as its standard of care for improving patient safety.

The European Society of Photobiology Congress meetings are important forums for dissemination of advanced knowledge and technological development in most photobiological fields of research, for scientific discussions and exchange of new ideas and for establishing new collaborations for future research. This annual Congress is generally accepted as one of the leading global conferences highlighting the advancements in the field of field of Photomedicine, Photobiology, Photodiagnostics and Photodynamic Therapy, and is attended by scientific and clinical representatives as well as thought leaders from around the world. Canadian based Ondine is presenting as the global leader in the Photodisinfection technology (antimicrobial PDT) and the premier developer of Photodisinfection based products and protocols.