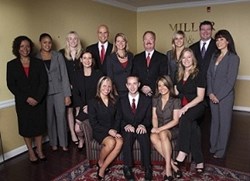 If the wires had been placed correctly, this would not have happened.

Last Friday, September 6, 2013, a unanimous jury in Prince George’s County awarded a $ 5.55 million dollar verdict for the Plaintiffs in a medical negligence and wrongful death case. The case was brought the daughter of the deceased and the estate of her late mother, Velda Faye Richardson.

Several days after surgery, once it is determined that the pacing wires are no longer needed, they are either clipped off at skin-level and left in or they are removed. If the wires are removed, a nurse in the patient’s hospital room simply pulls the wires from the patient’s chest one at a time.

In this case, Ms. Richardson underwent cardiac bypass surgery on Tuesday, February 1, 2011. Pacing wires were placed on her heart just before the surgery was completed. In the days that followed, she recovered steadily and was scheduled to be released from the hospital the following week.

The lack of information in Ms. Richardson’s medical chart presented challenges for both sides. The Defendants used the lack of information to argue that there was no proof the wires were placed incorrectly, while the Plaintiffs argued otherwise. Plaintiff’s additionally pointed to Ms. Richardson’s death certificate which had been filled out by the Defendant surgeon and clearly indicated that death was caused by “bleeding from graft injury as a result of pulling pacing wires.” In the end, the Plaintiffs’ bottom line resonated with the jury: “If the wires had been placed correctly, this would not have happened.”

Plaintiff’s counsel, Rodney M. Gaston, who fought for this woman and her mother's memory from the very beginning, said, "The tragic reality is that the pacing wires were not mandatory and could have been left in Ms. Richardson’s chest. But the jury rightfully held the surgeon accountable for the improper placement of the pacing wires.”

Why was there no settlement in this case? The doctor's insurance company made no offer to resolve this claim, either before or after suit.

You can learn more about bringing medical malpractice claims in Maryland here.