State-of-the-Art Oral History Room opens with a dedication focused on the Tuskegee Airmen. 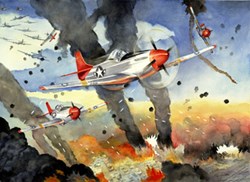 "I was a teenager during World War II, but I never heard about the Tuskegee Airmen," said artist Kay Smith.

Pritzker Military Library will celebrate the official opening and dedication of its Coleman T. Holt Oral History Room Sept. 12 at 6 p.m. The celebration will include the unveiling of a new painting by Kay Smith and a program featuring Tuskegee Airman O. Lawton Wilkerson and Dr. Daniel L. Haulman, chief of the Air Force Historical Research Agency’s Organizational Histories Branch at Maxwell Air Force Base, to be moderated by Robert Jordan of WGN TV.

Dedicated to the memory of World War II veteran and Tuskegee Airman Coleman T. Holt, the Holt Oral History Room has been soundproofed and equipped with state-of-the-art audiovisual equipment, enabling the Library’s staff to produce high-quality recordings of veterans.

Sponsored by Karen Pritzker and Michael Vlock, the Library has collected more than 60 oral histories from veterans of World War II, Vietnam, and the Korean War, many of which are available on the Library’s website or as audio podcasts from iTunes. Karen Pritzker was especially interested in expanding the Library’s ability to capture the direct, unchecked, unfiltered, remembrances of the men and women who have served in our nation’s conflicts.

“Many of us learn about service and courage from the vets we know personally,” said Karen Pritzker. “For many reasons, I was lucky to know Coleman T. Holt, a Tuskegee Airman and civil rights activist. He was a true and wise friend to me, and his daughter Colette Holt has been a staunch supporter of the Pritzker Military Library.”

In celebration of the opening, the evening also will feature the unveiling of an original watercolor painting for the Library by Illinois Artist Laureate Kay Smith. The painting, "Red Tails Escorting the B17s," is based on her research and interviews with Tuskegee Airmen and other World War II veterans.

“I was a teenager during World War II, but I never heard about the Tuskegee Airmen,” said Smith. “Coleman Holt and I were friends and he never talked about it. I learned about them 75 years later with the commission to do this painting about Red Tails for the Pritzker Military Library.”

Limited edition prints of Smith’s painting will be available at the event and online for $101, in honor of the 101 officers arrested during the “Freeman Field Mutiny” of 1945. The dedication and unveiling will begin at 5 p.m. followed by the program to be webcast live on http://www.pritzkermilitarylibrary.org.

About the Pritzker Military Library
Part military history and information center, part museum – the Library is open to the public with an extensive collection of books, artifacts and rotating exhibits covering many eras and branches of the military. Celebrating its tenth anniversary, the Library is a center where citizens and Citizen Soldiers come together to learn from each other about military history and the role of the Armed Forces in today’s society.