Bird Strikes in Airports – Identifying the Problem and Providing Solutions 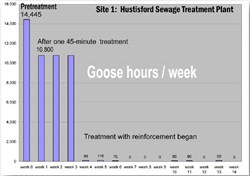 An investigative news report by NBC5 dated September 11, 2013 points out potential risk at the airport, as evidence shows it may not be operating in compliance with FAA rules to control birds in its flight paths.

The FAA (Federal Aviation Authority) takes strike risk very seriously. Birds, especially large species, can damage or even bring down large aircraft. Striking just one bird can dent a plane’s wings and nose, break the windshield and destroy vital engine parts, leading to loss of power and control. Small planes often crash after hitting a single bird; collision with a flock may cause disaster for even the largest and most powerful passenger or military aircraft.

In this instance at Dallas Love Field, waterbirds such as geese and ducks frequent a pond located along regular flight paths, while pigeons congregate on the landing lights of the airfield itself. According to the FAA’s Wildlife Strike Database, planes and birds collide at the Dallas airport on average 5 times per month in 2012. These numbers total around 60 strikes per year.

Of course, the problem of bird strikes and other wildlife hazards is not limited to large airports like Dallas Love Field. All airfields, whether commercial, military or small General Aviation, must approach these safety issues seriously.     Wild creatures exhibit complex behavior patterns, and when it comes to birds capable of movement through all three dimensions, fences are no help.

Science to the rescue: behavior-based biology gives clues to creative, effective solutions to repel birds and animals, lowering the risk of aircraft strike hazard. One such scientist is Professor of Biology Dr. Philip Whitford, nicknamed ‘Dr. Goose’ due to his extensive studies of Canada geese. A certified FAA wildlife hazard management consultant and a pilot himself, Dr. Whitford knows personally the risks that these birds can pose to aircraft; he regularly attends and presents at national and international pest management meetings, including the Bird Strike North America Conference. Geese are a large concern, given their size, the frequency of incidents in which they are involved, and the complex habits that can make deterring them very difficult. Dr. Whitford specializes in goose vocalizations, and created the unique patented goose alarm and alert call recordings that make the Bird-X GooseBuster sonic repeller so highly effective.

Dr. Whitford brought his FAA wildlife hazard consulting expertise to collaborate with international bird control industry leaders Bird-X, Inc. in developing products for airport use. Installations can be customized depending on the size and geography of the airfield. Large commercial and military airfields will benefit from one or several Megablaster units, one of the largest, most powerful sonic devices that utilize the sounds of both predator calls and birds in distress to help condition birds to change their habitat. These units, in combination with other sound units and visuals, create the perception of an unsafe area – causing birds to seek safer areas. These units have been installed worldwide with significant success, including large airports in Sweden, Bulgaria, Russia, China and other parts of Asia, and are currently being considered for use in many other European, Asian and Central American airports.

Smaller General Aviation airfields may be served with a single GooseBuster or Super BirdXPeller PRO unit, depending on their size and traffic, along with inexpensive but effective visual scares. Whatever the size of the airfield, a combined multi-sensory approach will always be more effective than efforts to scare birds with a single method. With large sonic units acting as primary scares, this approach includes additional visual scares such as Terror Eyes, a 3D Coyote and/or other products mimicking natural predators or scent or taste aversion products.

Reaching the birds with a moving object is extremely beneficial, which can be a difficult task from the ground – therefore, remote controlled drones prove extremely effective. Click here to see a video of the BirdXPeller Eagle Drone, with miniaturized sound units, in use at the Nashville International Airport.

While these systems are extremely effective and play a vital role in keeping flight paths clear, a wider multi-faceted approach is also key. Research into surrounding environs will suggest further risk reduction strategies. Local attractions that must be managed include wetlands, landfills, sewage treatment facilities and agricultural crops. Since food is a major inducement, ensuring people do not feed ducks and geese in areas close to airports is especially important. Dr. Whitford’s research into bird strikes has included multi-year observation of Canada geese in the environs of a busy Midwest commercial airport, leading to recommendations of alternative harvesting practices by neighboring farmers – this single strategy has vastly reduced the incidence of local goose incursions into aircraft flight paths.

In short, no one can guarantee 100% effectiveness, but a strong proactive approach utilizing analysis of local conditions, the latest technologies, multi-sensory deterrents, and random intervals, can make a real reduction in bird strike risk patterns. This means a safer environment for airports, pilots and passengers.

Bird-X MegaBlasterInstalled at an airport in Sweden

Bird-X MegaBlasterInstalled at an Airport in China