Standing With Hope Returning To Ghana, West Africa With a New Team of Prosthetists to Provide Limbs to Amputees

With a focus on creating a sustainable infrastructure to support the lifetimes needs of amputees, Tennessee based, Standing With Hope, is providing hope to amputees - one leg at a time. 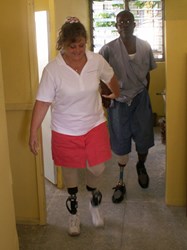 We confront painful realities with practical solutions and joy. We do it in our own family’s life, and now we’re helping others do the same - equipping them to continue standing with hope.

As a new team of volunteer prosthetists and related specialists head to Ghana on September 19, it marks an even greater impact by Standing With Hope for amputees in West Africa. The Nashville based organization traces its roots back three decades ago this year - when a young woman refused to let tragedy dictate her ability to make a difference in the lives of others.

"When my wife experienced that catastrophic accident as a teenager in 1983, most thought a young life of promise would be tragically cut short," states Standing With Hope President, Peter Rosenberger. "When she gave up both of her legs in the 1990's, most felt that those horrible events would certainly sideline Gracie permanently. But God had other plans. Although Gracie's crushed legs seem to dominate the course of her life for a dozen years following her wreck - their absence, ironically, would do the same."

From the moment she walked on two prosthetic limbs, Gracie Rosenberger purposed to provide her fellow amputees with quality prostheses, all as an opportunity to share the deep Christian faith that continues to sustain her.

As an increasing number of prosthetists, physical therapists, and other related professions continue to volunteer with Standing With Hope, the organization still models the passion, faith, and innovation of its founder. As Gracie's surgery count has now soared to 78 operations due to many complicated factors, she is unable to visit the clinic and work she envisioned, but will join the team through the new video link established earlier this year.

"With our ability to treat patients and train local technicians in real-time video, we've taken a giant leap in using technology to improve the access, fabrication, and maintenance of prosthetics for not only amputees in Ghana, but those that visit from neighboring countries."

Another aspect of this groundbreaking organization is the "Recycling Limbs" program, which Peter Rosenberger laughing refers to as: "Operation Footloose." Inmates at a local Tennessee prison run by Nashville based, Corrections Corporation of America (CCA), volunteer to disassemble donated used artificial limbs so that various components can be reused in Standing With Hope's work. "Various components from the limbs such as pylons, feet, knees, adaptors, connectors, and even screws - can used," states Rosenberger. "We call it 'Operation Footloose' because we want folks to '...Turn that foot loose so we can recycle it!'"

"We have a lot of fun with this, because we get to confront painful realities with practical solutions and joy. We do it in our own family’s life, and now we’re helping others do the same - and equipping them to continue standing with hope."

About Standing With Hope

Nashville based Standing With Hope is an evangelical Christian organization whose flagship program is a prosthetic limb outreach for underserved amputees in developing countries. Working primarily out of Ghana, West Africa, Standing With Hope partners with Ghana Health Services to train and equip their workers on building and maintaining quality limbs for their own people. Mobile Site