Partners issue philanthropic challenge to others to fight poverty by scaling up successful programs that educate and empower adolescent girls. 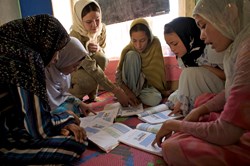 Sitting among her students, a BRAC teacher assists them with their lessons in grade three at a school near Mazar-e-Sharif, Afghanistan. (Credit: BRAC/Shehzad Noorani)

Jennifer and I challenge other philanthropists to invest in scaling up girls empowerment programs with a track record of success. - Peter Buffett, co-chairperson, NoVo Foundation

BRAC USA and NoVo Foundation announce a $5 million, five-year partnership to support the education and empowerment of adolescent girls through BRAC programs in multiple countries, starting in South Sudan and Afghanistan.

Targeting girls in hard-to-reach communities, the partnership will scale up several of BRAC’s existing education and empowerment programs, including primary schooling for younger girls and safe spaces for adolescents, from 2013 to 2018.

"Girls are the most marginalized members of societies in development, yet they also have enormous potential for changing their lives and the lives of those around them,” says Jennifer Buffett, CEO and co-chairperson of the NoVo Foundation.

“Jennifer and I challenge other philanthropists to invest in scaling up girls empowerment programs with a track record of success,” adds Peter Buffett, co-chairperson of the NoVo Foundation.

“BRAC is living proof of the power of the Girl Effect,” says Susan Davis, president and CEO of BRAC USA. “Our programs focus on education inside and outside the classroom, equipping girls with the tools they need to avoid early marriage and pregnancy, stay in school, support themselves, and ultimately take control of their lives. We know from our experience in Bangladesh, where BRAC was founded, that when girls and women become agents of change in their own lives, it catalyzes lasting change across communities and nations.”

The Girl Effect, a movement spearheaded by the Nike Foundation in partnership with others such as NoVo and BRAC, is defined as the unique potential of adolescent girls to end poverty for themselves, their families, their countries and the world. BRAC is the world’s largest Girl Effect implementing organization.

“Sisters need to come up and build the country,” says Ajah, 19, a member and peer mentor at a BRAC adolescent girls club in South Sudan, where the literacy rate is only 27%, and the level of child enrollment is second lowest in the world after Afghanistan, according to World Vision.

According to a UN report from 2011, children in South Sudan are more likely to die before the age of five than complete a primary education. Of children ages 6 to 17, about 70% have never entered a classroom, Unicef reports. Only four percent of South Sudanese women ages 15 to 49 have ever used contraception, according to the World Bank.

In nearby Uganda, independent research has recorded remarkable effects of BRAC’s adolescent girls program, called Empowerment and Livelihood for Adolescents. Self-reported condom usage increased 12.6 percentage points for program participants, compared to a control group, while fertility rates fell by more than 28% and the likelihood of income generation through self-employment rose 35%.

The NoVo-BRAC partnership will build on and add to a rich body of research that demonstrates which youth interventions work – and which do not – in specific contexts. Over the partnership’s five years, research and evaluation will be led by BRAC’s independent East Africa Research and Evaluation Unit, based in Kampala, Uganda, and operated in partnership with The MasterCard Foundation.

“I encourage other girls of my age to go to school for learning, because education is the backbone of the nation,” says a girl at a BRAC primary school in Afghanistan, where only about 40 percent of primary school-age girls are enrolled in school, according to Unicef.

In Afghanistan, the BRAC-NoVo partnership will fill a funding gap in a larger BRAC program operated with support from other development partners. The program will eventually put 120,000 children through primary school. Most will have never had the opportunity to attend school before, and 80% will be female.

The partnership leaves room for further expansion of programs for adolescent girls in other countries.

Founded in 1972 by Fazle Hasan Abed as a limited relief operation in remote Bangladesh, BRAC is now considered the largest nongovernmental organization in the world. The organization reaches an estimated 135 million people in 11 countries, with a vast array of antipoverty programs including microfinance, education, healthcare, legal rights training and community empowerment.

ABOUT NOVO FOUNDATION
NoVo Foundation’s mission is to foster a transformation in global society from a culture of domination and exploitation to one of equality and partnership. Co-chaired by Jennifer and Peter Buffett, the foundation was started with a generous $1 billion dollar pledge by Peter’s father, Warren Buffett. As they determined where NoVo would focus these resources, Jennifer and Peter felt strongly about entering a field that was both under-resourced and had significant potential for impact. They saw that girls and women in particular are undervalued and mistreated – but hold untapped potential for creating positive, lasting change in the world. Today, the NoVo Foundation initiatives include ending violence against girls and women, empowering adolescent girls, advancing social and emotional learning, and promoting local living economies.

ABOUT BRAC
BRAC, a development organization founded in Bangladesh in 1972, is a global leader in creating opportunities at scale as a means to end poverty. With more than 100,000 employees, it is the world's largest non-governmental organization, touching the lives of an estimated 135 million people in 11 countries using a wide array of antipoverty tools such as microfinance, education, healthcare, legal rights training and more.

ABOUT BRAC USA
BRAC USA is an independent, US-based affiliate of BRAC formed in 2006 to advance and support BRAC's global mission to create opportunities to unleash human potential and end poverty.