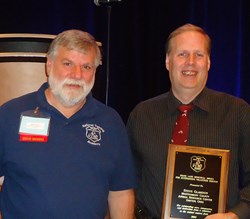 Steve Glardon, Volunteer for the ARC and IT Manager for Montgomery County, Ohio, was selected as the recipient of the Diane Lane Memorial Award for his dedication and service as a volunteer at the facility. Glardon began as a volunteer working with the adoption of dogs and their socialization. He now excels in his position of Adoption Counselor and assists the volunteer coordinator with volunteer orientations, presenting to prospective volunteers, and mentoring other volunteers in the ARC. He was voted as the Volunteer of the Year in 2012 by the staff at the ARC, which shows his outstanding commitment to his volunteer work and to the welfare of the animals at the shelter.

Cathy Petersen, Communications Manager for Montgomery County, Ohio, was selected as the recipient of the 2013 Bill Lehman Memorial Award for her exemplary service to Montgomery County’s ARC. Petersen supports the promotional efforts for multiple ARC programs including the annual dog licensing campaign, public service announcements, National Animal Control Officer Appreciation Week, and more. Petersen has been instrumental in assisting the ARC promote their message to the community.

Both recipients travelled to Atlanta, Georgia on Thursday, September 5th to attend the annual NACA Training Summit and receive their respective awards.