Works from over 100 artists will be on display as part of the annual Sierra Art Trails Open Studio Tour taking place just outside the southern entrance to Yosemite National Park, according to the Yosemite Sierra Visitors Bureau. 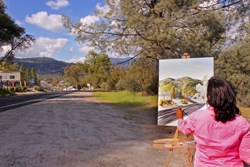 Artist Rita Alvarez of Coarsegold works on a piece that will be on display during the annual Sierra Art Trails Open Studio Tour.

Art doesn’t just enrich the community, our artists help make this a better area to live.

The works of a record-number of artists will be on display for the 11th annual Sierra Art Trails Open Studio Tour taking place October 4-6.

Based in Oakhurst which is located about 20 minutes south of Yosemite National Park, the region has a reputation for having more artists per capita than anywhere else in the United States, the annual tour attracts thousands of art lovers each year. The result is the annual tour that has been growing each year.

“We’re really excited for this year, we have 108 artists who are taking part and they have some amazing works of art to share with the public,” said Jon Bock who organizes the annual art show and year-long series of events that lead up to it.

The annual showcase features works of art in just about every media one can imagine at a series of venues throughout the region. Stops along the trial include just about every foothill community, with the first stop being in the small town of O’Neals, followed by Yosemite Lakes Park and Coarsegold, Oakhurst, Ahwahnee, North Fork and Bass Lake.

Bock said the large number of artists is fueling what he believes will be a great weekend for art lovers.

“What I’m seeing is that people are genuinely excited this year, that makes me feel really good. The artists are making bigger efforts and we’re getting more online and mail orders for catalogs. I feel a really good energy this year and I hope that translates to a good weekend,” he said.

The cost to attend the self-guided tour is $18 for two adults. The 2013 Sierra Art Trails Catalog, which also serves as the admission, contains a profile of each of the artists, maps and other information regarding the area.

“I’d like to see even more people support the arts and get the catalog, it’s a great publication. It’s become a resource for culture in the area,” Bock said.

The Sierra Art Trails Open Studio Tour was started in 2002 to take advantage of a very active, and large, art community.

“We wanted to draw people in to the region from areas outside of Yosemite and the Sierra. Really it was the realization that we had a cultural resource and the chance to take advantage of that and make the region a destination,” Bock said.

Guests received a free preview of the exhibit at a special event at Yosemite Gallery Row in Oakhurst on Saturday. In addition to showing off some of pieces that will be on display at the tour, five youths were introduced whose works will be included in the tour as part of the Student Sponsorship Program.

Local artist Jerry Bosworth received the annual Community Award in which the Sierra Art Trails purchased one of his works for $500 as a show of gratitude for his efforts in bolstering the art community. Bosworth accepted the donation under the condition that he be allowed to give it to the Student Sponsorship Program.

Another community award, the Keeper of the Flame Award, was given to the Children’s Museum of the Sierra. The award is given to a person or organization that embodies the Sierra Art Trail’s mission of promoting the importance of and value of arts in society.

Bosworth will be donating 25% of each photograph sold during the tour to the Little Church on the Hill restoration project, while another artist, James Hudson, is donating 100% of his proceeds to the Ahwahnee Volunteer Fire Department.

To learn more about the artists along the trial, visit http://www.SierraArtTrails.org or search Sierra Art Trails on Youtube to watch videos highlighting the many artists. You can also order the 2013 Sierra Art Trails catalog online, or call 559-658-8844.