ADVENTURES OF SERIAL BUDDIES is available on DVD and download at participating stores and at http://www.serialbuddies.com 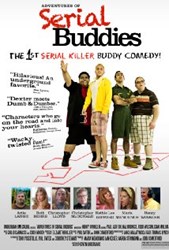 Former MTV Head Writer Keven Undergaro--- who spent a decade working as a 'carnie' in the carnival business--- penned the story based on a 'SERIAL BUDDY' he himself befriended. “One season in the carnie business I became really good friends with a coworker only to discover later he was a sociopathic killer.” “The world Keven grew up in inspired such a funny, fresh and original voice for moviemaking. ADVENTURES OF SERIAL BUDDIES blends elements of South Park, John Waters and Kevin Smith, while maintaining a voice that is uniquely, hilariously, it’s own”, said Maria Menounos. “Keven, myself and our team have a slate of mainstream films from action to comedy that we are currently packaging. We see this as a great model for other filmmakers to follow.”

Access Hollywood’s Scott “Movie” Mantz calls Adventures of Serial Buddies “seriously funny! Wacky twisted fun.” "An underground favorite and wild ride. The most deranged, insane, hilarious and surprising buddy movie about serial killers and clowns -- a fearless farce for fans of funny...and that's a lot of F's" said film critic and entertainment journalist Ben Lyons. Katherine Tulich of the Hollywood Foreign Press says it "reminded me of great Aussie comedies like Priscilla Queen of the Desert or Muriel's Wedding. Quirky individual characters who go on the road and into your hearts.” John Campea of AMC Movie News describes it as “Dexter meets Dumb and Dumber with lethal charm and fun.”

ABOUT MARIA MENOUNOS AND KEVEN UNDERGARO

Extra Host Maria Menounos produced her first 35mm feature film at age 18. Her works with partner, Keven Undergaro, have played nearly every major US film festival. Maria and Keven's pragmatic approach to filmmaking, passion for telling original stories and multiple promotional platforms make then amongst independent filmmakers to watch in years to come. The duo also launched AfterBuzzTV.com, an online broadcast network that exclusively produces recap 'after-shows' for favorite TV shows. Boasting a weekly audience of 20 million, hailing from over 75 countries and a roster of over 100 original shows and over 200 hosts, it is the largest new media platform on the worldwide web.