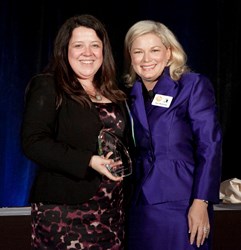 The security community in Canada is already highly collaborative and successful, so we saw this new initiative as a perfect fit.

Shea is responsible for overseeing the company’s Privacy, Records Management, and PCI DSS compliance programs and providing strategic direction on all matters relating to information management throughout the organization. With more than a decade of experience in the fields of privacy and security, she is known for her keen ability to move from vision to execution, her collaborative and results-driven approach to solving business problems, and her inspirational leadership style, which values the contributions of each and every team member.

“We were honored to have so many of the industry’s finest minds involved in our inaugural event,” said T.E.N. CEO & President Marci McCarthy. “The security community in Canada is already highly collaborative and successful, so we saw this new initiative as a perfect fit. We have been facilitating collaborative forums and celebrating the accomplishments of security industry visionaries across North America for more than a decade, and we believe it was time for a unique event to highlight the best of the best in Canada.”