In partnership with The Royal Mint and Odyssey Marine Exploration, Merit Gold & Silver has released one of the most unique and intriguing silver product we have ever offered: The 2013 Gairsoppa Britannia. 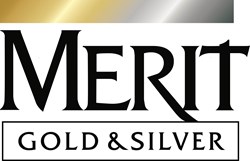 Merit has made it affordable to own silver recovered from the bottom of the ocean at a depth of nearly three miles. In conjunction with The Royal Mint, we have struck a ¼ oz, legal tender coin commemorating this event.

Silver recovered from three miles underwater, the 2013 Gairsoppa Britannia coin’s origins are steeped in history and represent a journey nearly one hundred years in the making.

“We are thrilled to be partnered with Odyssey Marine Exploration on this historic find”, said Peter Epstein, President of Merit Gold & Silver. “Merit has made it affordable to own silver recovered from the bottom of the ocean at a depth of nearly three miles. In conjunction with The Royal Mint, we have struck a ¼ oz, legal tender coin commemorating this event. Never before in history has a major mint struck such a coin.”

Towards the end of 1940, the British steamship SS Gairsoppa sailed from Calcutta loaded with 7000 tons of iron, tea and silver. During her journey she was attacked and sunk by an enemy German U-boat. Only one member of the crew survived the attack.

Historians and explorers alike have pored over documents, hoping to uncover the SS Gairsoppa’s final resting place. The members of the exploration team at Odyssey were determined to find the long lost ship.t.. Using advanced sonar and robotic technology, the wreck was located and confirmed in 2011. They had indeed found the SS Gairsoppa.

Between 24/7 operations conducted in 2012 and 2013, the Odyssey crew recovered 2,792 silver bars, weighing over 110 tons. To commemorate this historic find, The Royal Mint has turned this recovered silver into limited edition coins.

Each quarter-ounce coin is struck of .999 pure silver recovered from the SS Gairsoppa; three miles below the surface of the sea. Like the standard issue Silver Britannia, the limited edition Gairsoppa version bears the bust of Queen Elizabeth on its obverse, with Philip Nathan’s iconic “standing Britannia” on the reverse. The rim of each coin is struck with “SS GAIRSOPPA” to commemorate the ship and crew and identify the silver that has undergone this extraordinary journey to the depths, and back again.

Since the company’s inception, Merit Gold & Silver has evolved to become one of America’s premiere precious metal dealers dedicated to the craft of making it easy, safe and secure for consumers to buy gold and silver. The organization’s multilevel approach to client satisfaction has helped Merit Gold & Silver develop a loyal customer base and attract precious metal collectors new to the market. Merit Gold & Silver has an expansive array of gold and silver bullion and bars, platinum and palladium coins, and a variety of semi-premium and premium coins produced by reputable mints across the globe.