An economic forecast from one of Canada’s largest banks sees no cause for concern on the housing front, reports Condo.ca, with world economies on the rise and home sales up across Canada in August. 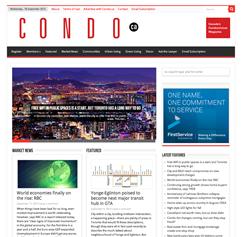 Condo.ca reports on a stronger housing market than expected, with condo sales leading the gains.

Toronto home resales are up again in September: compared to the same period last year, sales rose 29 per cent, and that follows a rise of 21 per cent in August. All of this activity is a sign of renewed confidence.

Condo.ca, the magazine about everything condo, reports that Canada’s economy, like the rest of the world’s advanced economies, is showing new signs of vigour, according to a forecast released by a leading Canadian bank. As exports increase, unemployment stabilizes and is expected to fall, and our most important trading partner gathers steam, Canada’s GDP is expected to perform at above-potential rates. No real estate crash is in the cards, just a slight pullback, as builders cut back and markets adjust to new realities. In fact, Toronto home resales are up again in September: compared to the same period last year, sales rose 29 per cent, and that follows a rise of 21 per cent in August. All of this activity is a sign of renewed confidence, say the analysts, and Condo.ca has this information and many other stories to keep readers informed about all aspects of condo life. Read these and other urban lifestyle and condo-related stories at Condo.ca:

“World economies finally on the rise”
The signs are everywhere. In the Euro-area, GDP rose this quarter for the first time in more than a year and a half. Unemployment, which has been crushing in some countries, at least did not get worse, and businesses have indicated their intentions to start investing and expanding again. In Canada, exports have been rising, particularly to the US, where the economy is also showing renewed vigour. Concerns about a widespread housing market correction are overstated, and consumers seem to agree. Housing sales in the Toronto market are rising again, even as interest rates do not. Read more . . .

“Home sales up across country in August”
The increase in home sales across Canada in August was not unexpected. After all, last August we saw a big drop, as the dampening effect of the federal government’s new mortgage rules started to be felt. Home buyers stayed away in droves. What was unexpected was the size of the increase. Since July, the market has really turned a corner, and year-over-year sales are increasing in leaps and bounds: 21 per cent in August, 29 per cent so far in September. And it is not only in Toronto. Markets across the country have been picking up and most, according to the Canadian Real Estate Association’s latest monthly report, are in solid balanced territory. Read more . . .

“Yonge-Eglinton poised to become next major transit hub in GTA”
Yonge and Eglinton has been a popular area for home buyers for generations. The neighbourhood is full of the kind of things urbanites want: good schools, good shops, good restaurants, good housing stock. It has also had good transit connections, being one of the original stops on Toronto’s 1954 Yonge subway line. Soon the intersection of Yonge and Eglinton will be crossed by another major transit line: the Eglinton crosstown LRT. A report from Metrolinx, the agency that controls transit in the GTA, now defines Yonge and Eglinton as an “anchor hub,” by which they mean a major urban centre with major transit connections. Condo developers like Tridel are already moving into the area, and much more action is sure to come. Read more . . .

About Condo.ca
Condoa.ca is all about living and lifestyle. Thousands of subscribers and readers rely on Condo.ca’s in-depth coverage of the condominium scene and urban living each week. Condo.ca is committed to following and discussing the trends: urban lifestyle, design and neighborhoods, with a special focus on inspiration. Our daily news beats include: