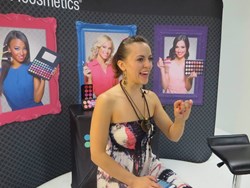 The fashion perspective is changing; the shoppers of today and tomorrow are looking for a fresh look and up-to-the-minute style, and the social-media influencers are the ones delivering.

Move over, Anna Wintour; a YouTuber needs your seat.

Today’s young trendy fashionista is about as likely to seek up-to-the-minute fashion and beauty advice from an enigmatic editor in a magazine as she is to take it from her mother. She wants the scoop from someone like her but hipper, more on the pulse of what’s trending, and who has the information whenever she needs to know. She wants a YouTube guru.

“One of the most popular topics on video sharing sites is beauty. It’s time to say goodbye to fashion magazines and in-store make-up demonstrations because YouTube has all the answers. We watch their videos to learn what products they buy, what stores they shop at and what beauty techniques they use,” posted blogger Sarah Aspler of the YouTube gurus on the Blog Studio. “These expert channels supply us viewers with a constant stream of original content that keeps us going back for more.”

What started as a trend with young women coming home from the mall and emptying their shopping bags for casual homemade YouTube videos (known as “hauls”) has grown into a fashion and beauty revolution. A 2012 study by Google and Compete revealed that nearly one in three shoppers uses YouTube to shop for apparel, with video driving 37 percent of shoppers to an online store. Thirty-eight percent of Millennials are likely to rely on video to fuel their apparel shopping purchases.

Fashion and beauty brands are taking note and funneling their products to the gurus for exposure and reviews, especially the standouts with combined subscribers that total in the multi-millions and views in the hundreds of millions.

“Haul videos work because they take the ‘tried and true’ testimonial form of promotion and add the interest, excitement, and spontaneity that can be generated by a homemade video,” wrote Ira Kalb, professor of marketing at the Marshall School of Business at University of Southern California, in a story that appeared in Business Insider magazine’s May 2013 issue. “Once the video is created, links to other social media can leverage the effort and reach a much wider audience. If they go viral, the brand impact can be enormous. Haul videos are proving to be a strong marketing force in the clothing industry.”

One of those companies in the beauty realm is BH Cosmetics, which got into the business of creating high-quality makeup palettes and brushes only in 2008. It was recently been placed on Inc. magazine’s 2013 Inc. 500 list, which recognizes the country’s fastest-growing private companies. To reach this distinction, a company had to grow more than 918 percent from the start of 2010. The average company on the list grew 2,900 percent. BH Cosmetics placed at 446 on the list.

“We give much of the credit for our sharp rise in growth on our products’ high visibility on YouTube,” says Fred Sadovskiy, BH Cosmetics co-founder and CEO. “Since the beginning, our strategy has been to capitalize on the power of social media and YouTubers communicate our message directly to our target market.”

The YouTubers have become so popular that they’re being seen offline as well. Kenn Henman, president of ALM Public Relations (aLine Media), the leading PR company for social-media influencers, says the demand for these young women at fashion- and beauty-sponsored events is getting hotter and hotter. From live tutorials to fashion-week sit-ins, their presence is beginning to transcend beyond the Internet-hooked demographic.

In response to the sharp rise in popularity of the YouTube gurus, aLine Media expanded its Social Media Influencer division and currently represents some of the top YouTube talent in the industry. Created to promote the new faces of tastes and trends, the division counts among its clientele a long list of social-media authorities who post their beauty and fashion finds on YouTube and other social media platforms to hundreds of millions of eager fans, subscribers and followers.

With its newly enlarged Social Media Influencer division, aLine Media will not only increase exposure to its clients, launching them further in to social-media superstardom, it will also help them connect with new products that they might feature on their social media channels.

One of his aLine’s clients is Heart Defensor, whose YouTube name is ThatsHeart. With a total social reach of more than 1 million, she was recently sponsored to attend New York Fashion Week by cosmetics giant Maybelline and attended the shows of BCBGMaxAzria, Mara Hoffman, Richard Chai, Hervé Léger and Elle Fashion Next. For the latter, she conducted red-carpet interviews with Elle magazine Editor-in-Chief Robbie Myers and Creative Director Joe Zee, as well as fashion journalist Louise Roe.

“As we all know, there are only so many chairs they can line up along the runway, and now these girls are squeezing the traditional fashion matrons out,” says Henman. “The fashion perspective is changing; the shoppers of today and tomorrow are looking for a fresh look and up-to-the-minute style, and the social-media influencers are the ones delivering.”

YouTube influencer, ThatsHeart has over 1 Million followers on her social media channels.

HollywoodTV host Chelsea Briggs stays on the pulse of the trends to deliver a fresh, quirky take on the world of entertainment. She has more than 400,000 subscribers and 17 million views on YouTube.