Lady Antebellum Tickets for Their Take Me Downtown Tour 2013 Available Now at Doremitickets.com

Tickets for Lady Antebellum Concert Tour with Opening Acts Kip Moore & Kacey Musgraves Now on Sale at Doremitickets.com Save up to $100 on Tickets. 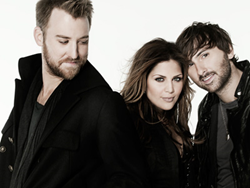 Next on the program will be a Canadian tour with a kickoff at the Air Canada Centre, in Toronto, ONT on Feb 28, 2014. The group will then perform at the Rexall Place, in Edmonton, ALB . The Canada tour will be punctuated with a night at the Pacific Coliseum in Vancouver, BC.

Doremitickets.com: Your #1 Lady Antebellum Tour 2014 and tour information. Doremitickets.com is a retail website founded in 2009. Since launching in 2009, our website has helped connect thousands of live entertainment fans to the vast network of ticket brokers that list tickets on the doremitickets® Online Exchange. These professional ticket brokers offer more than 7.5 million event tickets on our exchange every day.