Schell Shocked and Star of the North receive medals from the BTI. 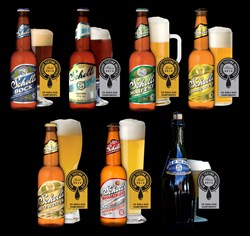 The August Schell Brewing Co., the second-oldest family-owned brewery in the country, brewer of Schell’s and Grain Belt, has received two more medals from the Beverage Testing Institute. Schell’s Bock, Maifest, Hefeweizen, and now its Schell Shocked Grapefruit Radler have won gold medals this year while Schell’s Barleywine, Zommerfest and now Star of the North have received silver medals. This brings the total number of awards won from the Beverage Testing Institute to seven so far this year.

The Beverage Testing Institute (BTI) was founded in 1981. All of the panelists are professional guest tasters who are retailers, restaurateurs or prominent writers recognized as world-class sensory evaluation experts in the field of alcoholic beverages. The judging ratings range from 96 to 100 for superlative all the way down to 80 and below for not recommended.

Schell Shocked scored a 93 in the Fruit Beer category, earning the title “Exceptional.” Available each year from May through October, Schell Shocked is August Schell Brewing Company’s rendition of a traditional German-style radler. It combines the crispness of an American style lager with the sweetness of all-natural grapefruit juice. The Beverage Testing Institute described it as being “Yellow straw color. Aromas of grapefruit marmalade on scone with a fruity, medium body and a crisp, grapefruit rind and orange sorbet like finish. Very clean, fruity, and tasty.”

Schell’s Star of the North, the first in a series of berliner weisse beers called the Noble Star Collection, scored an 86 in the Berliner Weisse category earning the title “Highly Recommended.” To brew Star of the North, Schell’s used an authentic mixed culture of yeasts and bacteria from Berlin for fermentation and aged it in one of their original cypress wood lagering tanks from 1936. The long secondary fermentation in the wooden tank allowed the defining characteristics of the beer to develop. It was then hand-filled and bottle-conditioned, allowing it to continue to develop and evolve. The Beverage Testing Institute described it as being “Pale straw green color. Aromas of cashew butter, asparagus frittata, yeasty bread dough with a very crisp, tart medium body and a tangy, roasted citrus, nut, cucumber skin, and grassy finish. A bone-dry table beer.” Look for the second beer in the Noble Star Collection, a berliner weisse with raspberries added, called Framboise Du Nord in November.

Schell Shocked and Star of the North Brochures