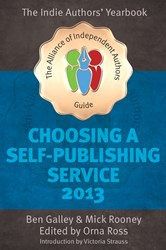 The Alliance of Independent Authors has expressed concern about a new comparison service aimed at self-publishing writers.

The site, recently launched by well-known UK brand, Writers & Artists (of Yearbook fame), has been welcomed by the trade press and is said to "size up" different self-publishing providers but, in fact, no rating system is provided.

The Alliance's concern centres on the way in which poor providers appear beside reputable organisations without rating system or quality assessment.

Self-publishing writers are vulnerable to literary fraud and misrepresentation, especially when starting out, and many of the companies appearing on this comparison website are the subject of widespread author complaints, including controversial companies run by Author Solutions (ASI), now owned by Penguin, and subject to a class action lawsuit in New York State.

Some of these companies received abysmal ratings in ALLi's Choosing A Self-Publishing Service Guide and Bloomsbury was informed of their reputation and behaviours.

"ALLi worked with Bloomsbury for some months on a potential rating system for their comparison site," says Director, Orna Ross. "We devised a system that would ensure the rating system was robust and meaningful, but despite our best efforts, it became clear that service providers, not authors, were at the centre of this endeavour -- and we withdrew."

ALLi asked that it would be made clear to authors using the website that service providers have paid a fee to be there. Also, that those who provide good services would be differentiated from those who were the focus of repeated and ongoing complaints.

ALLi is disappointed to find that none of its concerns appear to have been taken on board. "It's our feeling that authors deserve better than this from the company that built up the Writers & Artists brand," says Ross.