Set for September 2014, this will be the first agricultural fair held in the county since the 1970s. 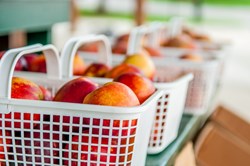 The Franklin County Agricultural Fair is back and we look forward to keeping the tradition alive for years to come.

The Franklin County Board of Supervisors on Dec. 17 voted unanimously in favor of plans to officially revive the county agricultural fair in 2014.

“The Franklin County Agricultural Fair is back and we look forward to keeping the tradition alive for years to come,” said Board of Supervisors Chairman David Cundiff shortly after the board approved funding, the date and the location of the 2014 event.

In 2011, a committee formed under the direction of the former Department of Commerce and Leisure Services to explore the idea of bringing back a county agricultural fair, which had previously ended in the 1970s. Shortly after, the Board of Supervisors showed support for the initiative and encouraged the department to continue development. However, since that time, efforts were stalled by difficulties securing a midway provider.

Now, under the direction of the Office of Economic Development, the fair planning committee has recommended that the board approve the Office’s request to contract with Brinkley Entertainment, Inc. of Walnut Cove, North Carolina in the amount of $33,000 for midway services. Additionally, the committee recommended to set the dates of the fair for Wednesday, Sept. 10 through Saturday, Sept. 13, 2014 for the revival of the Franklin County Agricultural Fair, and to hold the event at the Franklin County Recreation Park on Sontag Road near Rocky Mount. The committee voted unanimously at its December 5 meeting to make these recommendations.

The September date not only supports the committee’s goal of organizing an agricultural event closer to the fall harvests, but also supports such valuable attributes as the inclusion of career and technical skills competitions for local and regional youth, which occur during the academic calendar year.

“This contract will allow us to set our own entry and ride fees, which gives us an opportunity to make this event affordable for local families,” said Economic Development Director Michael Burnette. “We want to encourage community participation and ownership of the fair as we highlight the rich agricultural heritage of Franklin County.”

Regionally, Brinkley Entertainment, Inc. services the annual Carroll County Agricultural Fair in Hillsville, Tanglewood Mall’s annual Tons of Fun event in Roanoke, the annual Celebration event at the Martinsville Speedway, and the Massies Mill Ruritan Carnival in Roseland, among others.

Franklin County’s agreement with Brinkley Entertainment, Inc. will include 12 mechanical rides, a 50-foot Ferris wheel, two concession trailers and four or more games for the 4-day event. The fair committee will also have the opportunity to add additional games, attractions and entertainment to make the family-friendly event even more appealing to local and regional patrons.

The Franklin County Agricultural Fair Committee will now begin work on various details surrounding the event, including marketing, entertainment and agricultural competitions, among other items. The group will also begin working to secure vendors, sponsors and other revenue sources to make the fair a financially sustainable event.