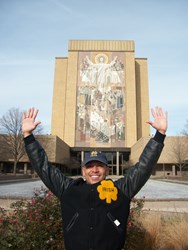 When I graduated valedictorian from high school, I earned a full scholarship to UT-Austin. I promised myself that one day, I would pay it forward and return that favor. Today is that day. I kept my promise!

Texas’s Modern Hispanic Gentlemen is a “celebratory campaign presented by Texas Monthly and Ketel One® Vodka and “singles out men who embody an ideal: Hispanic leaders who pursue excellence in their professional lives and are empowering social change in their community. This year, Ketel One has chosen four distinguidos caballeros in Texas (one in Houston; one in Dallas; one in San Antonio; and one in Austin). Each gentleman will be honored with an event that also raises support for his charity.”

“I grew up in a small farming community in the Texas Panhandle,” reminisced Madrid. “Prominently placed on coffee tables around town was the Holy Bible…then Texas Monthly. This is an enormous honor. Texas Monthly is a respected Texas institution. Bravo to Ketel One and Texas Monthly in spotlighting Latinos who embody servant leadership. Israel, Mark, Juan, and I—strangers prior to this campaign—have joined forces to build stronger communities throughout Texas and across our great country. We are committed to it!”

The Mark L. Madrid Scholarships will be awarded to top Hispanic students with a minimum 3.5 GPA and majoring in business at the University of Notre Dame and the University of Texas at Austin. Hispanic graduate students enrolled in the Notre Dame Master in Nonprofit Administration program are eligible, as well. “I am a product of scholarship,” remarked Madrid. “I have been working with fanatic discipline since my first opportunity to compete in the third grade. I won that first place blue ribbon back then, and I haven’t stopped working since. When I graduated valedictorian from high school, I earned a full scholarship to UT-Austin. I promised myself that one day, I would pay it forward and return that favor. Today is that day. I kept my promise!”

Madrid is the COO for the Houston Hispanic of Commerce and has been recognized as one of Houston’s 40 Under 40 by the Houston Business Journal. Considered one of Houston’s most respected and innovative leaders, he was bestowed the title of Honorary Colonel in 2013 by the United States Army Reserve 75th Training Command. He was an Endowed Presidential Scholar at the University of Texas at Austin and graduated with Honors. Mark realized one of his dreams when he landed his first career position on Wall Street in New York City. Throughout his professional journey, Madrid has always placed the highest priority on giving back and paying it forward. In 2011, he was honored with the prestigious Jefferson Award, which is considered the Noble Prize for public service. In 2012 the United States Hispanic Chamber of Commerce and the University of Notre Dame Mendoza College of Business recognized Mark as their inaugural national fellow for Notre Dame’s Master of Nonprofit program. He is pursuing this Master's program, while working full-time in his leadership capacity. He is a Latino Leaders Magazine Club Leader of the future, which distinguishes the nation's top Latinos in finance, media, non-profits, law, education, entertainment and the arts. Also, Madrid has moderated panels for PODER Magazine’s EMERGE, which is a unique networking and professional development series for emerging young Hispanic professionals. Recently, he was honored as a 2013 National Hispanic Scholar by ALPFA(Association of Latino Professionals in Finance and Accounting) and the Hispanic Scholarship Fund.

The Texas’s Modern Hispanic Gentleman campaign features honorees in the four major Texas cities. Houston’s honoree is Madrid; Dallas/Fort Worth’s is Juan Rodriguez; Austin’s is Mark Garza; and San Antonio’s is Israel Sanchez. I am great company,” said Madrid. “What an incredible group of transformational and inspirational leaders. Unequivocally, our top priority is to build stronger communities, one person at a time; no false promises. We are warriors that pour our hearts, talents, and sweat equity into great causes. In an era when volunteerism and giving are down, we are dedicated to bucking this trend with an iron will, a servant heart, and an incomparable tenacity.”