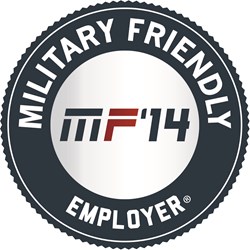 Our Military Friendly Employers® constitute those companies who are actually moving the needle and hiring from the military community. - Sean Collins, Vice President for Victory Media and a nine-year Navy veteran

“Our Military Friendly Employers® constitute those companies who are actually moving the needle and hiring from the military community,” said Sean Collins, Vice President for Victory Media and a nine-year Navy veteran. “The 2014 Military Friendly Employers ® reported hiring over 117,000 service members and spouses over the last 12 months, representing an average of 14 percent of total new hires. This isn’t a pledge, it’s an update of ongoing hiring activities.”

Candidates can leverage the digital event at no cost to speak directly with companies prior to leaving the service and make informed decisions about their civilian careers. Free candidate registration is required. More information on the Virtual Career Fair is available at http://www.militaryfriendly.com/events .
The survey results that determined the 2014 Top Military Friendly Employers ® were independently tested by Ernst & Young LLP based upon the weightings and methodology established by Victory Media. Companies vehemently compete to earn the Military Friendly ® moniker which gives them an advantage in recruiting highly coveted military-trained talent. Each year companies taking the survey are held to a higher standard than the previous year via improved methodology, criteria and weightings developed with the assistance of an Advisory Board consisting of leaders in the military recruitment community. A full list of board members can be found at MilitaryFriendly.com/board.

About Military Friendly®:
The Military Friendly ® designation process includes extensive research and data-driven surveys of leading opportunities for the military community in the areas of employment, education, franchising and cities. The survey, methodology, criteria and weightings are developed with the assistance of third party Advisory Boards consisting of recruiting experts from across the country and are independently tested by Ernst & Young LLP based upon the weightings and methodology established by Victory Media. Any company interested in participating in the Virtual Career Fair must first submit a Military Friendly Employers® survey and compete for the moniker. The survey is administered for free and is open annually. To have your company added to the free survey contact us at contact(at)militaryfriendly(dot)com. Criteria for consideration can be found on our website MilitaryFriendly.com.