“There are no Pilgrims on the US Supreme Court” ~ A Representational Thanksgiving Day Essay by Political Theorist Bryan W. Brickner

Utilizing an English Christian classic, John Bunyan’s The Pilgrim’s Progress (1678), Bryan W. Brickner addresses the lack of Protestantism on the US Supreme Court this Thanksgiving and how to resolve the issue, constitutionally, in a new essay on the Bryan William Brickner Blog. 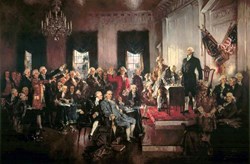 Scene at the signing of the Constitution of the United States

Unambiguously, this is not religious: it’s representational and about representing We the People in Congress according to our birthright – George Washington’s number, 30,000.

Using John Bunyan’s The Pilgrim’s Progress (1678) to raise awareness this Thanksgiving, a new essay by Bryan W. Brickner addresses the lack of Protestantism on the US Supreme Court and how to resolve the issue, constitutionally. Brickner has a 1997 political science doctorate from Purdue University and is the author of several political theory books, to include The Promise Keepers (1999), Article the first of the Bill of Rights (2006), and The Book of the Is (2013).

“This problem,” Brickner offered in clarification, “that there are no Protestants on the US Supreme Court, the last being Justice John Paul Stevens in 2010, is not a religious problem; Article VI of the US Constitution is clear on that question, as it states: ‘but no religious Test shall ever be required as a Qualification to any Office or public Trust under the United States.’”

“This is about representation,” continued Brickner, “and twelve words in Article I of the US Constitution: ‘The Number of Representatives shall not exceed one for every thirty Thousand.’ Unambiguously, this is not religious: it’s representational and about representing We the People in Congress according to our birthright – George Washington’s number, 30,000.”

“The recent Senate change to the filibuster rule – the so-called nuclear option – is small potatoes to building George Washington’s Congress,” closed Brickner: “It’s like We the People are watching a fake TV show – a simulacrum – and yet we know 435 representing 300 million isn’t our heritage – it’s our politics.”

The Bryan William Brickner Blog is a collection of published works and press coverage and an ongoing resource for the political science of constitutions and the biological science of cannabinoids.