Jose Cid's "It's Snowing In New York" is now in rotation on SiriusXM channels on your radio and online. Cid is represented exclusively by Mark Sonder Productions, Inc. 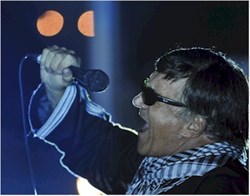 Jose Cid's "It's Snowing In New York," is already climbing the charts.

Mark Sonder, CSEP, Chief Entertainment Officer at the award winning event entertainment music and talent agency Mark Sonder Productions, Inc. is proud to announce a move of international proportions that Portugal's #1 Pop Superstar, Jose Cid, and his tune, "It's Snowing In New York," has now been put in rotation on The Christmas Channel on your SiriusXM Satellite Radio and online.

SiriusXM’s commercial-free holiday music channels will be available on multiple satellite radio channels. They will also be available in the Holiday category via the SiriusXM Internet Radio App for smartphones and other connected devices and online at siriusxm.com, according to the SiriusXM website.

A FREE music download of Jose Cid's "It's Snowing in New York," is available at: http://www.marksonderproductions.com/freemusicdownload.

Jose Cid and family with you the best for a happy and healthy holiday season and always.