This November, many families are including the Reproductive Science Center (RSC) of New England in their expressions of thanks. Since its pioneering opening 25 years ago, RSC New England has been responsible for the birth of more than 15,000 babies. 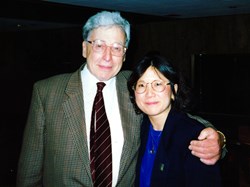 Kathryn Go, PhD, RSC New England Science and Laboratory Director, with Dr. Robert Edwards, 2010 winner of the Nobel Prize in Physiology and Medicine for his work in the development of IVF.

RSC New England has introduced numerous advances in the practice of reproductive medicine since opening in 1988.

RSC New England is celebrating its 25th anniversary year. But, most importantly, November marks the birth of the first baby conceived through in vitro fertilization (IVF) facilitated by the Reproductive Science Center’s fertility expert doctors and embryologists.

Looking back at the development of reproductive science, the first IVF baby, Louise Brown, was born in England in 1978. Biologist Dr. Robert Edwards and his colleague Obstetrician/Gynecologist Dr. Patrick Steptoe combined the eggs and sperm of Louise’s parents together in laboratory culture media to allow fertilization and embryo development to ensue – the process known as in vitro fertilization (IVF).

In 1986, the American Society for Reproductive Medicine (ASRM) formed the organization that would become the Society for Assisted Reproductive Technology (SART). This marked the recognition of assisted reproduction as an important and specific practice of reproductive medicine.

RSC New England opened in October 1988, began doing IVF cycles in January 1989, and in November 1989 achieved its first live birth. A member of ASRM and SART since their inception, the Reproductive Science Center has participated in developing the guidelines followed nationally by ASRM member fertility treatment doctors and centers. RSC New England has also achieved and/or introduced numerous advances in the practice of reproductive medicine and assisted reproductive technology.

In March 1994, RSC was among the first fertility centers to offer Intracytoplasmic Sperm Injection (ICSI), a laboratory procedure that isolates and injects one sperm into an egg, resulting in a high likelihood of fertilization and embryo development. Considered one of the sentinel achievements in reproductive technology, ICSI has revolutionized the treatment of male factor infertility.

In 1996, Reproductive Science Center physicians and embryologists achieved pregnancy for a couple challenged by a previously untreatable form of male factor infertility known as azoospermia, in which the man has no sperm in his ejaculate. The RSC doctors were able to use sperm, which had previously been frozen after being surgically retrieved from the man’s testicles. Using ICSI, his testicular sperm was injected into eggs retrieved from his wife. Embryos developed, leading to a successful pregnancy and live birth of a healthy baby.

In addition to ICSI, RSC was also an early adopter of Preimplantation Genetic Diagnostic testing (PGD), and more specifically “microarray” technology that affords a much higher sensitivity for genetic mutation detection or chromosome copy number determination in embryos. RSC Science and Laboratory Director Kathryn Go, PhD explains that, “The evolution of these methods is critically important in all areas of medicine and is widely applied to understand the differences between healthy and diseased cells and tissues.”

The 1990s also marked the emergence of “third party reproduction” -- the use of egg donors and gestational surrogates. These were critical in expanding services to older infertile women especially, as well as women who could not gestate (carry a pregnancy). IVF using egg donors and gestational carriers has also revolutionized the ability for male couples to have genetically related children. The Reproductive Science Center’s Medical Director, Samuel Pang, MD, was the first Reproductive Endocrinologist in New England to facilitate IVF for a gay male couple in 1998. Dr. Pang has also pioneered “Reciprocal IVF” for female couples in which one partner provides eggs and the other carries the pregnancy. (The center maintains GayIVF.com, a website dedicated to information about assisted reproduction options for gay, lesbian and transgender men and women.)

Most recently, RSC New England has begun using “vitrification”, a rapid freezing and advanced thawing technique that enables oocytes (eggs) to be preserved. Among other benefits, vitrification enables women with cancer to preserve their fertility. RSC has an urgent response team available specifically for cancer patients.

In 2010, RSC opened MyEggBank at RSC New England, a program through which young healthy women donate their eggs to be frozen, stored in the Egg Bank and available for use by couples that can only achieve pregnancy using donor eggs. The MyEggBank network, of which RSC New England is a founding member, is the largest international frozen egg bank.

One of the largest and most experienced fertility treatment centers in the United States, the Reproductive Science Center of New England provides comprehensive diagnosis, evaluation, consultation and treatment for infertility. RSC New England has 11 locations in Massachusetts, New Hampshire and Rhode Island and is a partner member of IntegraMed Fertility, the most expansive network of infertility treatment centers and fertility specialist physicians in the nation.