American Heritage Girls, a rapidly growing faith-based alternative to the Girl Scouts, has created a Respect Life Patch that reinforces the organization’s commitment to honoring life from conception to natural death. 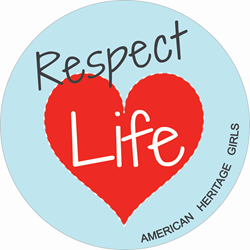 One of the things that attracts so many girls to American Heritage Girls is our strong affirmation of the Biblical worldview, which includes respecting all life from conception to natural death.

Troops representing more than 30,000 girls in 48 states can earn the patch by participating in an event that brings attention to respecting life or by providing a service project for an organization whose mission/purpose demonstrates a desire to respect life, such as pregnancy resource centers, pro-life groups and hospices.

In January, AHG assisted the Catholic Diocese of Arlington as the largest sponsor of its national prayer gathering and youth rally in Washington, DC, prior to the March for Life event, which marked the 41st anniversary of Roe v. Wade. Across the nation, AHG members regularly participate in pro-life events, making the patch symbolic of the high value the organization places on the full continuum of life.

"One of the things that attracts so many girls to American Heritage Girls is our strong affirmation of the Biblical worldview, which includes respecting all life from conception to natural death," said Patti Garibay, AHG executive director and founder. "Over the years AHG troops have supported life in a variety of ways, and we are pleased to offer them the opportunity to earn this patch and display it on their uniforms," she added.

The idea for a Respect Life Patch originated when girls in Michigan AHG troops designed and earned a Pro-Life Patch for participating in events that support the pro-life movement. One such event was a prayer hour at a local abortion clinic during the 40 Days for Life campaign.

AHG is a Christ-centered alternative to Girl Scouts because of its emphasis on Christian values and family involvement. AHG girls participate in a wide array of badge programs, service projects, leadership opportunities and outdoor experiences.

"I recommend American Heritage Girls enthusiastically to parents who want their daughters involved in a traditional Christian-based program that will reinforce what they are trying to teach at home," said Dr. James Dobson, founder of Focus on the Family and host of "My Family Talk."

Founded in 1995 in Cincinnati, Ohio, AHG currently has more than 30,000 members across the globe, with more than 720 troops in 48 states. In the past four years, it has experienced 40-50 percent membership growth annually. For additional information, visit AHGonline.org.