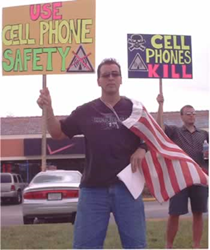 The American belief that EVERY AMERICAN has the right to be informed clearly on health hazards they face in our modern day society.

John Coates, RF Safe Founder, says, “Every now and again a democratic society gets lucky when their elected officials champion new (sometimes unpopular) public safety warnings for the best interest of everyday people and not powerful industries. In the end, history has proven over and over that when the public is properly informed – lives are saved.”

D-Sen. Josh Green is one of those politicians that put the health of his constituents first by pushing for an end to the wireless industries (tobacco like tactics) of delaying much needed labeling of health warnings on wireless devices.

Sen. Green introduced Senate Bill 2571 SD1, which has already passed the Senate Health Committee, is a measure calling for cell phones sold in Hawaii to come with a prominent health warning — similar to what a smoker sees on the sides of cigarette packages to warn them of danger.

Opponents of the bill argue it will add cost to already expensive devices as manufactures bear increased cost dealing with stricter safety regulations. While others say warning labels on their beloved Smartphone will simply be unattractive.

Coates says neither is a viable argument, “Tax payers will be burdened with the increased medical cost for treating cancers from excessive exposure to cell phone radiation. And if warning labels being unattractive is an argument, just ask yourself how sexy a brain tumor or breast cancer is in comparison”

RF Safe encourages informed citizens to get involved by showing support for Senate Bill 2571 SD1. Those with concerns over wireless radiation exposure can forward an open letter to Hawaiian Senator Rosalyn Baker which is signed by 16 experts on the subject of cell phone radiation. Visit RF Safe’s website to forward the open letter and sign the petition to show your support of this milestone in state enforced wireless safety regulations.

RF Safe wants everyone to remember the selfless words of the 35th President of the United States, given in a speech only months before being assassinated.

“. . . the number of children and grandchildren with cancer in their bones, with leukemia in their blood, or with poison in their lungs might seem statistically small to some, in comparison with natural health hazards, but this is not a natural health hazard–and it is not a statistical issue. The loss of even one human life, or the malformation of even one baby–who may be born long after we are gone–should be of concern to us all. Our children and grandchildren are not merely statistics toward which we can be indifferent. ”
– President John Kennedy, June, 1963

RF Safe wants consumers to GET INVOLVED! Because with pressure from citizens informed on wireless health hazards, both the wireless industry and governmental agencies are slowly making progress under their normal bureaucratic constraints. Sign the petition, share it with friends and show your support for Senate Bill 2571 SD1 becoming the law everywhere for a step in the right direction regarding a consumers “Right to Know” about the safety of wireless devices.

Learn what you can do to reduce cell phone radiation exposure at http://www.rfsafe.com.