OxBlue, a leader in the construction webcam industry, is demonstrating its international reach in Norway, where Kruse Smith, established in 1935 in Kristiansand by Anders Kruse Smith and Norway’s largest family owned construction company, is using multiple OxBlue construction cameras on a major multi-use green construction project. 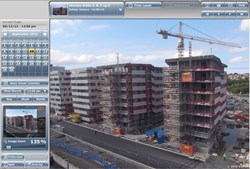 Multiple cameras on this multi-building project allow both the client and the developer to watch the construction process.

“The construction team uses the cameras for monitoring and management and the developer uses them for public relations.” Kenneth Oftedal, Kruse Smith

On the waterfront in Stavanger, Norway, Kruse Smith is building a two-phase green project consisting of a high-rise condominium building, for Kruse Smith Kanalboliger AS, and two office complexes for Hinna Park, a leading developer in the Stavanger area. The first phase consists of a four-building, eight-story-tall condominium with 122 units, called Seaview, and an office building, called Troll.

Troll is one of Norway’s first “passively designed” office buildings: Although energy for the heating needs of the project comes from a local biomass facility, the building is designed to produce its own hot water and cooling. Gullfaks, another office complex to be built in Phase 2, will meet BREEAM (BRE Environmental Assessment Method) standards, one of the world’s top green construction certification systems, developed in the UK.

Both the clients and the developer wanted to watch the building process, so the need for on-site construction webcams was obvious. Kruse Smith first considered various construction webcams that were available locally but found them to be “costly and difficult to maneuver,” according to Kenneth Oftedal, Kruse Smith project manager and director of international procurement.

Because he had used OxBlue construction cameras when he worked in the U.S., Oftedal understood the benefits of a system that uses wireless cellular technology to facilitate 24/7 access to the site by anyone using an Internet-enabled device. After he showed all concerned parties the advantages of OxBlue construction cameras, they selected multiple cameras to document the individual projects.

Since everyone is using the cameras, Oftedal wanted to be sure to select cameras that would benefit all constituents.

“The construction team uses the cameras for monitoring and management,” said Oftedal, “and the developer uses them for public relations.”

OxBlue construction cameras are in operation all over the world. “Our international experience has resulted in OxBlue establishing cellular contracts or the ability to negotiate them worldwide,” said Chandler McCormack, president of OxBlue.

About OxBlue: OxBlue is a leading construction webcam service provider, with hardware, connectivity and expertise across 6 continents and all 50 states. OxBlue’s construction camera services connect stakeholders on and off the jobsite by improving communication through high-resolution imaging and time-lapse videos. OxBlue serves clients in a variety of industries, including numerous Fortune 500 companies and more than 100 of ENR’s Top 400 Contractors.