New Book, ‘Jumping the Line,’ Gets to the Core of Important Political Debate 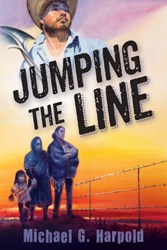 In his new book, “Jumping the Line,” Michael G. Harpold, a 35-year veteran of the Immigration and Naturalization Service (INS), sheds light on important factors in the national immigration reform conversation.

Harpold’s experience includes serving as a U.S. Border Patrol officer in California’s San Joaquin Valley during the early years of the Grape Strike led by Cesar Chavez. It’s that grassroots perspective, he says, that allows him to point out potential unintended consequences in immigration reform proposals coming from both sides of the aisle.

Politicians of all stripes may have good intentions regarding immigration reform, but that’s not enough, he says. The proposed guest farmworker bill, for instance, could do serious harm to existing farmworkers.

“The proposed guest farmworker bill would bring in more immigrants willing to work for even lower wages, which would be disastrous for the farmworkers already here,” he says. “Progressives need to remember that it’s not fair to invite immigrants when the American dream is on hold indefinitely because the constant stream of new immigrants keeps wages low,” he says.

“Conservatives need to accept that many of the estimated 11.5 million illegal immigrants in the U.S. are already deeply integrated into our economy and society.”

Until relatively recently, undocumented farmworkers were simply assimilated after a period of time, he says. Congress should enact a law allowing them to remain legally and work until they can qualify for a green card – something that’s been done in previous immigration policy, he says.

“…The tale captures and holds the reader’s attention with an often gut-wrenching tale of man’s struggle against economic and social forces that are much bigger than any one person’s dreams and desires,” writes Amazon reviewer Lori Ortiz, who gave the book five stars. “…It’s a read that makes the reader stop and think about ethics, justice and the difficulties of establishing a just and workable immigration policy in the United States.”

Despite immigration reform, domestic farmworkers may continue to live as an impoverished underclass, Harpold says.

Michael G. Harpold began his 35-year career in the U.S. Immigration and Naturalization Service (INS) as a border patrol inspector on the Mexican border. Later in his career while stationed at Bakersfield, California, he met César Chávez. Their paths crossed because Chavez believed that illegal border-crossers were a threat to his efforts to build a union for farmworkers. Harpold served two years in Vietnam with the U.S. Agency for International Development and, after returning to the INS, became an officer of the employee’s union, making frequent appearances before congressional committees testifying on proposed immigration legislation and the INS budget. Harpold served five years in the U.S. Army and won a competitive appointment to West Point. He holds a bachelor’s degree from California State University at Fresno and attended Golden Gate University School of Law in San Francisco.