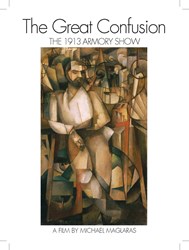 "The Great Confusion: The 1913 Armory Show" now available on DVD through Amazon.

Independent filmmakers Michael Maglaras and Terri Templeton of 217 Films announce that their new film about the 1913 Armory Show is now available on DVD. “The Great Confusion: The 1913 Armory Show” can be purchased through Amazon at this link: http://ow.ly/su0wI. Excerpts can be viewed at this link: http://vimeo.com/66408225. This is their fifth film.

“The Great Confusion: The 1913 Armory Show” features more than 60 works by American and European painters and sculptors and probes deeply into the history of how the show was organized. It provides fascinating glimpses into the backstage efforts of the American artists Arthur B. Davies, Walter Pach, and Walt Kuhn as they worked tirelessly to bring a new art to a new American audience. Produced by 217 Films. Written, directed and narrated by Michael Maglaras. Executive Producer Terri Templeton. Features preeminent Armory Show scholar Laurette McCarthy and President Theodore Roosevelt reprisor Joe Wiegand. NR. 90 Minutes. Read the director’s statement at this link: http://ow.ly/su3wo.

“The Great Confusion: The 1913 Armory Show” premiered in September 2013 to a sold out audience at the New Britain Museum of Art and will return for an encore screening in April. This weekend, the film is being show at the Hood Museum of Art at Dartmouth College and at the Memorial Art Gallery in Rochester, New York. The next viewing will occur in April at the Virginia Museum of Fine Arts. Screening dates are being added frequently and the tour will continue through 2104. The full schedule can be viewed at this link: http://two17filmsschedule.blogspot.com/.

More about the 1913 Armory Show: From February 17 until March 15, 1913, thousands of Americans pushed their way through the doors of the 69th Regiment Armory on the east side of New York City while a battle was waging “for or against” Modern Art for the first time. What they saw would annoy and infuriate some...and captivate, delight, and inspire many.

What resulted from these four weeks of mass exposure to European artists such as Cezanne, Renoir, Van Gogh, and the upstart Marcel Duchamp (with his “Nude Descending a Staircase”), as well as such Americans as Marsden Hartley, John Marin, and Charles Sheeler, changed how Americans came to understand their own times. By entering through the doors of an armory, they had entered through the doors of the Modern Era.

More about 217 Films: 217 Films is an independent film company in Ashford, Connecticut devoted to the American artistic experience. “The Great Confusion: The 1913 Armory Show” is 217 Films’ fifth film since 2005 about the art born of the profound energy and vigor of the American twentieth century.

In 2005, Michael Maglaras and Terri Templeton released their first film “Cleophas and His Own” about American painter Marsden Hartley's epic narrative of love and loss. Maglaras both directed and played the role of Hartley in this film. In 2008, they released a second film about Hartley called “Visible Silence: Marsden Hartley, Painter and Poet” – the first-ever documentary on the life of Hartley. In 2010, with their film “John Marin: Let the Paint be Paint!” they established, through the first full-length documentary on this important painter, that John Marin was one of the fathers of American Modernism. All three films, among other distinctions, have been shown to acclaim at the National Gallery of Art in Washington, D.C. Their fourth film, “O Brother Man: The Art and Life of Lynd Ward” was released in 2012 and will screen this March at the Morgan Library and Museum in New York City. Their new film, “The Great Confusion: The 1913 Armory Show” was released in 2013 and is currently touring the United States.

217 Films is an independent film company in Ashford, Connecticut devoted to the American artistic experience. “The Great Confusion: The 1913 Armory Show” is 217 Films’ fifth film since 2005 about th