Chapman University Singers to Offer Ten Concerts in and Around Houston, Fort Worth/Arlington and Dallas, January 19-26

Acclaimed top choir of the California-based university has toured the world and performed for popes and presidents. 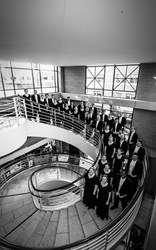 The Chapman University Singers, under the direction of Dr. Stephen Coker, will offer ten performances in churches in and around Houston, Fort Worth/Arlington and Dallas, January 19-26. All concerts are open to the public.

Chapman University’s top choir, the University Singers, embarks on a tour of Texas next week. The acclaimed choir, based at Chapman’s respected Hall-Musco Conservatory of Music in Orange, California, has toured throughout the world in its more than 50 years of existence, including command performances for popes and heads of state. The Chapman University Singers, under the direction of Dr. Stephen Coker, will offer ten performances in churches in and around Houston, Fort Worth/Arlington and Dallas, January 19-26. All concerts are free and open to the public.

The University Singers, under the direction of Dr. Stephen Coker, boasts a wide choral repertoire ranging from the Renaissance to more modern compositions. The choir’s tour selections include vocal works by Brahms, Britten, Whitacre, Victoria and others. The highly select 34-voice mixed choir will also perform international folk songs and opera selections from the bel canto era.


•
ABOUT THE CHAPMAN UNIVERSITY SINGERS
Founded in 1963 by William D. Hall, D.Mus., the Chapman University Singers have sung throughout the U.S. and Europe, including performances for many heads of state, and performed in private audience for Pope John Paul II. An all-undergraduate ensemble, the University Singers include vocal performance and music education majors from Chapman University’s respected Hall-Musco Conservatory of Music. The Singers are led by Stephen Coker, Ph.D., who served previously on the choral faculties of Portland State University, the University of Cincinnati College-Conservatory of Music, and Oklahoma City University. In addition to his academic work, Dr. Coker has conducted choirs, workshops and festivals in South Korea, Taiwan, Portugal, Israel and Sweden.

ABOUT CHAPMAN UNIVERSITY http://www.chapman.edu
Consistently ranked among the top universities in the West, Chapman University provides a uniquely personalized and interdisciplinary educational experience to highly qualified students. Our programs encourage innovation, creativity and collaboration, and focus on developing global citizen-leaders who are distinctively prepared to improve their community and their world.