Ticket Down (http://www.ticketdown.com) has rolled back pricing on tickets for the epic matchup of two amazing soccer teams, Mexico and Nigeria at the Georgia Dome in Atlanta on 3/5/14. This well known secondary ticket exchange is also offering their customer appreciation promo code DISCOUNT for added savings. 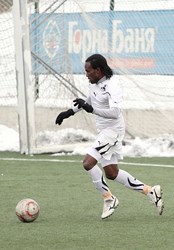 Ticket Down has slashed prices on tickets for the upcoming exhibition game between Mexico and Nigeria at the Georgia Dome in Atlanta. This well known secondary ticket site is also offering their exclusive customer appreciation promo code DISCOUNT for added savings.

The home of the National Football League’s Atlanta Falcons will welcome international football to their building on March 5. The Georgia Dome will host a game featuring Mexico for the fourth time in the past five years. The North American team will play Nigeria as both teams continue to prepare for the 2014 World Cup being held in Brazil.

Mexico, the 21st ranked team in the world according to the Federation Internationale de Football Association, will be entering their 15th World Cup and will look to advance past the Round of 16 for the first time since 1986. The nation has qualified for the tournament in each of the previous five and has reached the Round of 16 each time while failing to finish in the top 10. They have won more than one game during a single World Cup just three times in their history.

The team facing Mexico at the Georgia Dome in Atlanta, Georgia is the 41st best team in the world according to FIFA. The Nigerian national team will be competing in their fifth World Cup when they take to the pitch in Brazil this summer. In their past two tournaments (2002 and 2010), they failed to advance past the group stage and couldn’t register a single victory. In their first two appearances (1994 and 1998) in the most popular soccer tournament in the world, they finished first in their group and advanced to the Round of 16.

When Mexico arrives in Brazil for the World Cup, they will be prepared to compete against Croatia, Cameroon and the host nation, Brazil. Mexico will need to get to Brazil with as much momentum as possible considering their opponents in the group stage. Nigeria will be competing in a group anchored by Argentina, Bosnia-Herzegovina and Iran. They will face as tough of a road past the group stage as Mexico, which makes this matchup far more important.

The Mexican squad will be led in this matchup against Nigeria by forwards Oribe Peralta and his 15 career goals, Aldo de Nigris and his nine career goals and 22-year-old Raul Jimenez. The two most decorated players on the Mexican roster are defenders Rafael Marquez and Francisco Javier Rodriguez. They have the most caps of any players on the roster and need a strong showing to reaffirm their position on the World Cup roster.

The Nigerian team is one that doesn’t have a large amount of caps and goals as those numbers only count when they play another FIFA team, but they have some young talent. All four of the forwards on their roster are younger than 23, giving them a potential speed and endurance advantage over the older Mexican defenders. Also on the roster is one of the most talented defenseman in the world, Azubuike Egwuekwe. He leads the team in caps and will play a major role in their success or failure this summer.

Ticket Down delivers tickets to sold out concerts and events worldwide when no one else can, and they do so at discounted prices. As a member of TicketNetworkDirect, they can guarantee the delivery of tickets on time for sporting events like NASCAR, NBA, NFL, and NHL. This popular ticket exchange also has Mexico vs. Nigeria tickets at great everyday low prices.