Garmin 620 should be receiving cycling features during early 2014 that will make it a better duathlon and cycling device according to Heart Rate Watch Company. 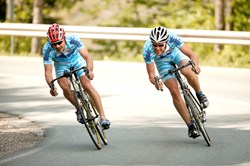 No question that a Forerunner 620 with cycling updates will give the watch more universal applicability because speed in miles per hour, via a cycling mode, is the way all sports outside of running look at pace....

Forerunner 620 should be receiving cycling updates somewhere in the later part of the first quarter of 2014, which will be a very welcome improvement according to the Heart Rate Watch Company.

"At CES, Garmin stated they were looking to add the cycling features to the product, which was one of the major features subtracted when the watch was upgraded from the 610," says Rusty Squire, President of the Heart Rate Watch Company. He adds, "Those features will greatly expand the market for the watch with both cyclists and triathletes now that the platform is water resistant."

"No question that a Garmin Forerunner 620 with cycling updates will give the watch more universal applicability because speed in miles per hour, via a cycling mode, is the way all sports outside of running look at pace," says Squire. He adds, "I, for one, was very surprised that they didn't leave the cycling features in there from the 610."

The watch would work fine for Olympic distance triathlon but likely won't produce any swim metrics or cycling power data if it is like the 610 according to Squire. "It is a lightweight GPS watch, very minimalistic with the best running features of any watch on the market today," says Squire.

The HRM Run strap contains accelerometers that help it deliver advance metrics like run oscillation and ground foot contact time. "You really need the strapped version to get the most out of this watch," says Squire.

All customers of the Heart Rate Watch Company receive complimentary copies of "How To Successfully Use A Heart Rate Monitor" and "How To Elevate Fitness With Strength and Interval Training."

Where To Buy Garmin 620 With Expert Advice

The Garmin 620 is available for purchase at the Heart Rate Watch Company and questions can be answered by calling 866-586-7129.

Forerunner 620 With Cycling Updates Will Be Handy For Mountain Biking, Too