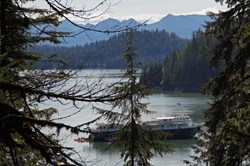 'Adding in craft beer tastings for those who are interested adds a little extra hoppiness to the week,' said Captain Dan Blanchard, CEO.

“Exploring the Puget Sound area by boat lets us access scenic areas for kayaking and hiking without traveling too far each day,” said Captain Dan Blanchard, CEO. “Adding in craft beer tastings for those who are interested adds a little extra hoppiness to the week.”

The craft beer theme cruise features guest experts Kendall Jones and Kim Sharpe Jones, authorities on the Seattle craft beer scene and media partners for the Washington Beer Commission. An exclusive WAVE ale, named after the boat’s nickname, brewed by the Jones’ with Schooner Exact Brewing Company will be on tap. Guests will enjoy nightly happy hour tastings of select craft beer from nearby breweries, presentations by the Jones’ and beer recommendations matching the evening’s dinner menu. A brewery tour and tasting will be offered at both Port Townsend Brewing and Island Hoppin Brewery on Orcas Island. A Sucia Island beach bonfire on the last night sets the stage for a session on Beach Beers and the virtues of craft beer in aluminum cans.

Travelers spend the week searching out and seeing marine life and seabirds up close. Gray whales, orcas, seals, sea lions and bald eagles are all found in the area. A knowledgeable team of expedition guides leads excursions and provides interpretation along the way. Guests enjoy a full complement of adventure gear for kayaking, stand-up paddle boarding, hiking and skiff excursions. A custom made kayak launch platform allows four kayaks at once to quickly and safely launch off a stable platform.

After a full day of adventure, guests may enjoy a soak in the hot tub. Yoga classes take place on deck each morning. The vessel has fitness equipment, a resource/DVD library and massage is available for a fee. An underwater camera mounted on the ship’s bow streams video from the underwater world to flatscreen televisions in all guest rooms and the lounge. Healthy and hearty meals feature fresh ingredients including locally sourced produce and seafood.

Charters and group incentives are available. To book or to request additional information, contact your travel agent or Un-Cruise Adventures at 888-862-8881 or sales(at)un-cruise(dot)com.

Editor’s note: Visit the Media Gallery for press materials and images. More high-res photos for editorial use are available through Sarah Scoltock at sarahs(at)un-cruise(dot)com.