On the weekend of January 24 - 26th, the USA BMX National Series will converge on the Ford Truck Arena for stop No.2 in the USA BMX national series. This is the same circuit that, 28 races later, will conclude in Tulsa’s River Spirit Expo during Thanksgiving weekend. 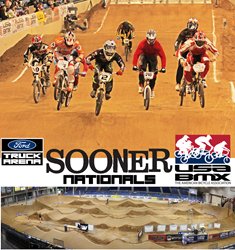 "The economic impact of this event will bring millions of dollars to the Tulsa economy and the event could not have taken place without the incredible support of the Tulsa Sports Commission," stated COO of USA BMX, John David.

One of America’s largest action sports - BMX Racing, is coming to town... again. The USA BMX national circuit stops in 22 different states throughout the year in their 30-race schedule, with this second stop of the tour takes place at the Ford Truck Arena. Along with it will be over 1,000 amateur racers from around the country, ranging in ages from 2 to 70-plus. This will be the first of two USA BMX events that will be held in Tulsa this year.

The family-oriented action sport of BMX Racing has been around since the early 70’s, and has been an Olympic sport in both the 2008 Beijing and 2012 London games. Thanks in part to the global exposure that the Olympics, along with the growth of 2nd and 3rd generation of racer’s getting their kids involved in the sport they grew up in, BMX racing continues to grow in numbers and popularity with today’s youth.

As the largest extreme sport in the nation, BMX racing is full of nonstop action. Up to eight riders speed down the starting hill, maneuvering over dirt obstacles and around banked turns in hopes of gaining a spot on the podium. On average, each race is a 35 second sprint, with full contact, close-knit racing and sometimes - thrilling crashes and victories. BMX Racing is exciting to watch for all ages - and spectating is free. Racers range in age from 2 to 70+ and will be racing to amass points for titles in their age classes and the highly coveted USA BMX No.1 Amateur title for boys and girls.

Saturday’s racing will kick off with the Strider bike class, for 2 & Under, 3 and 4 year olds. Youngsters as young as 20 months old have been seen racing a shortened section of the track on these pedal-less push bikes. Proof of how BMX is a true family sport, at the other end of the spectrum, there will be plenty of parents and even some grandparents racing in the larger-wheeled classes for 30, 40, 50 and 60+ year olds. USA BMX racing is one of the rare sporting activities where moms and dads get to compete along with their children.

"The economic impact of this event will bring millions of dollars to the Tulsa economy and the event could not have taken place without the incredible support of the Tulsa Sports Commission," stated COO of USA BMX, John David.

FRIDAY: Action begins on Friday with practice throughout the afternoon and a pre-race starting at 5pm.
SATURDAY: Practice continues in the morning and National racing kicks off promptly at 11:30am with Strider (balance bike) racing for 2, 3 and 4 year olds, followed by the first rounds of Pro racing.
SUNDAY: Action begins at 8:00am, with the main events starting at approx. 1pm.