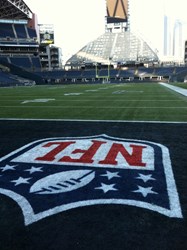 CenturyLink Field - home of the Seattle Seahawks, 2014 NFC champions. Seattle Boat Show attendees will have access to the field for photo opps.

There aren’t many opportunities for the public to walk out onto CenturyLink Field. It’s going to be a pretty exciting and fun experience for a lot of people, and we’re thrilled that we're able to offer this to our guests in the lead up to the Super Bowl.

Seattle Boat Show organizers have decided to pay homage to the home team by closing the BIG Seattle Boat Show at CenturyLink Field and South Lake Union one day early so that exhibitors, event staff and showgoers can watch the Super Bowl with their friends and families. The show will close at 8pm on Saturday, February 1. That still gives boating enthusiasts nine full days to visit the West Coast’s largest boat show. The Show opens at 11am on Friday January 24.

By special arrangement with CenturyLink Field, the show is also allowing access to the field so showgoers can celebrate the Seahawks victory over the 49ers in the NFC Championship Game. The field will be open from 12 noon until 2 pm (except January 29 and January 30). Showgoers will be able to walk the turf, experience what it feels like to be staring at the goal posts and setting up to make that winning kick, take pictures in front of the goal posts and show their team pride leading up to the Super Bowl. What better way could there possibly be to spend a lunch hour? Tickets to the Seattle Boat Show are $12.

“There aren’t many opportunities for the public to walk out onto the field,” says George Harris, president of the Northwest Marine Trade Association. “It’s going to be a pretty exciting and fun experience for a lot of people, and we’re thrilled that we are able to offer this opportunity to our guests in the lead up to the Super Bowl. Go Hawks!”

Other Seattle Boat Show Attractions
When not on the field, there’s plenty for the fans to see and do at the Boat Show. The show features 1,000 boats and yachts indoors and on the water, and more than three acres of accessories, electronics and boating gear. There are also many fun attractions including:

Seattle seascape sculpted in sand
Ted Siebert from The Sand Sculpture Company - winner of 7 Guinness sandsculpting world records and Brian Turnbough, the reigning doubles world champion of sand sculpting - will be sculpting a 28 foot long and 14 foot high sandcastle from 50 tons of sand during the 10 days of the show. The sand sculpture will be a detailed fish eye lens look at the Seattle city skyline and Elliott Bay. Ted has built sand sculptures in 35 countries and has even been the subject of a question on Jeopardy. Showgoers will be able to watch Ted and Brian at work creating this masterpiece with amazing details including the Seafair pirates and Seahawks fans.

Sick wakeboard tricks and the chance to try them on a trampoline – Fridays, Saturdays and Sunday
Members of the Central Washington University wakeboard team will be demonstrating the tricks that got them the national championship on a 13x13 Springtree trampoline which is what they train on in the off season to perfect their tricks. Come watch them do whirlybirds, 720s, some grabs, glides and other tweaked out moves. When not being used for demos, the trampoline is available for showgoers to try their skills. Eddie Roberts III, 2013 College Wakeboard Regional and National Champion will be on hand to give pointers. Demos will be on Fridays, Saturdays and Sunday of the Show at 2pm.

If Money Is No Object – Largest and Most Expensive Boat in the Show
The largest in the show is 135 feet and asking price is $21,495,000.00 million. Tour it and a host of other luxury boats at South Lake Union and dream a little.

Kids Aqua Paddlers
Fun for the little boaters, kids attending the show can enjoy time on the water using the Aqua Paddlers paddle boats. Life jackets will be provided. Aqua Paddlers will be available for use each day of the show.

Know Before You Go