Newly released data shows injuries resulting from the use of explosive weapons and their consequences. 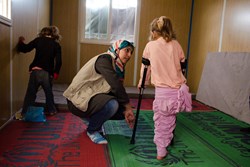 With the Geneva II Middle East peace conference poised to begin, Handicap International has published a study into the causes and types of injuries observed by the associations' teams working with internally displaced persons in Syria. Among interviewed people who had new injuries due to the crisis, 60% were victims of explosive weapons and were suffering from serious physical injuries. Handicap International calls on the international community to bring an end to the use of explosive weapons in populated areas and to ensure that civilian populations access humanitarian aid and health care. The association wishes to draw the international community's attention to the terrible legacy the Syrian conflict will leave in terms of the number of people left disabled and who will require extensive, long-term care management.

From November 2012 to October 2013, Handicap International conducted 1,847 interviews with displaced persons in Syria, in the areas where the association works to provide them with better psychological and physical care. Almost half (913) of those interviewed had sustained injuries related to the current conflict. One in five of these people were under the age of 17.

It is particularly disturbing to note that 60% of these victims had been injured by explosive weapons, while 31% had sustained gunshot wounds. The people harmed by explosive weapons were often suffering from severe physical injuries: more than 60% had fractures or complex fractures, 25% had undergone an amputation, 21% were suffering from peripheral nerve injury, and 7% had irreversible spinal cord injuries.

"These devastating injuries require immediate and adequate care to avoid permanent disabilities or even putting the victim’s life in danger," said Elizabeth MacNairn, Executive Director of Handicap International U.S. In addition, 88.49% of all respondents with new injuries related to the crisis reported they had lacked satisfactory access to rehabilitation services prior to Handicap International’s intervention. Victims of explosive weapons need access to appropriate health services urgently, thus avoiding complications and in some cases death.

These victims also require long-term medical, financial and social support, often for the rest of their lives. The large number of victims will require the mobilization of very sizable resources. Handicap International wants to draw attention to the devastating legacy this conflict will leave for a whole generation of people with injuries and disabilities, and preparations need to be made right now to deal with these terrible consequences. The association has observed that in countries undergoing post-conflict reconstruction (Cambodia, Angola, Vietnam, etc.) the needs in terms of developing health and rehabilitation services, training their staff and providing economic and social support, are often underestimated.

Causes and types of injuries encountered by Handicap International while working with Internally Displaced Persons in Syria: A focus on the impact of explosive weapons.