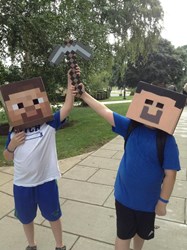 Computer programming skills are the building blocks of software applications. Java is an object-oriented programming language that is versatile and universal, being used on over 3 billion devices. The program is a STEM education opportunity where teens develop and hone computer science skills while having fun creating mods for Minecraft.

The summer camp also offers time each day for outdoor recreation, swimming and tennis in a Minecraft-themed environment. In the evening activities include outdoor games, network and console gaming and free time to spend with friends.

Teens bring home their Minecraft mods from camp and can continue to code and show off their work to family and friends.

Camper registration is available at ComputerCamps.com.

The game of Minecraft is hugely popular, having sold millions of copies worldwide. Players have the ability to explore, create and build objects out of textured cubes in a 3D world. The game is similar to building with Lego kits. Crafters have access to a virtual world where they can roam freely and design any number of architectural structures. Minecraft is creative as well as collaborative, and with no rules or limitations, kids are in control.

As kids and teens become more fluent with technology, the line between gaming and learning is blending together. School teachers are utilizing Minecraft’s world building functionality to educate children in the classroom. Minecraft has the ability to be a powerful teaching tool and can cover topics such as probability, physics, history, math, and foreign languages..

Emagination Minecraft Xtreme Camp is designed to advance technical skills, encourage teamwork and creativity, and teach Java programming. The program is immersive but fun with teens having the opportunity to develop friendships as they explore the world of Minecraft in the classroom and transfer their game play skills to an outdoor summer camp environment.

For teenagers looking to further their technology education, Emagination’s Minecraft Xtreme Camp offers the perfect STEM education opportunity to advance skills in an object-oriented programming language while creatively exploring the boundaries of a popular computer game.